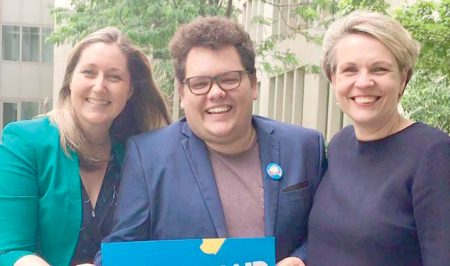 Jopuka Productions, the Central Coast’s only not-for-profit youth arts theatre company, will make its first foray into political theatre with a new staging of the renowned Australian production, Gaybies, when it comes to the Youth Arts Warehouse this July.

Hotly political and deeply personal, Gaybies is a moving piece of verbatim theatre that tells the story of children who have grown up with gay parents. Drawn straight from interviews with children aged 5 to 50, it features authentic accounts of family life told with humour, honesty and wisdom. Written by Helpmann Award winner, Mr Dean Bryant, Gaybies received rave reviews when it was first staged as a reading at Melbourne’s Midsumma Festival in 2013.

Bryant wrote Gaybies to inspire and inform the public on what it is like to grow up in families that were once considered hypothetical, but are now controversial. It answers the question typically posed of such families: “But what about the children?” Gaybies will be directed by Jopuka’s artistic director, Mr Joshua Maxwell, a Gayby himself, who found his life story the focus of national media attention during the 2017 Marriage Law Postal Survey, after writing an open letter to the Prime Minister about his upbringing with same-sex parents.

When Marriage Equality passed into law, Mr Maxwell was in Parliament House, Canberra, to witness his own family’s story being told, and to add his voice to the advocates who sang ‘I Am Australian’ in the public gallery, in an emotional moment that he hopes to recapture on stage. “Staging this production after the Marriage Equality victory, in the 40th year of Mardi Gras, feels incredibly fitting,” he said.

“We’ve been given the immense privilege of amending the end of the show to include the survey result. We want the audience to share in what that moment in Australian history felt like for rainbow families,” he added. The production plays a strictly limited season, from July 20, at The Youth Arts Warehouse in Gosford, and features a cast of 14, of which 50 per cent identify as members of the LGBTQI community.