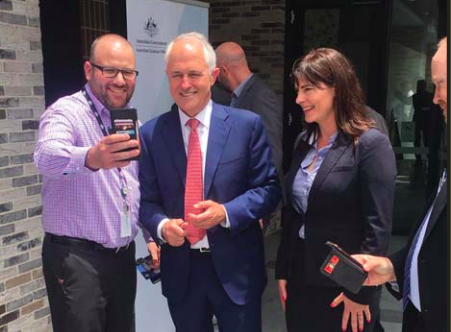 Prime Minister Turnbull and Member for Robertson, Ms Lucy Wicks, pose for a photograph with an ATO employee

Member for Robertson, Ms Lucy Wicks, has said the Coalition Government has delivered income tax relief for all Australian workers.

Addressing Parliament on the passing of the Federal Government’s package of tax reforms, Ms Wicks said: “The government has ensured that all Australians paying tax will be better off. “They will be paying less tax, and will be rewarded for their hard work, both now and into the future. “Taxes in Australia will now be lower, fairer and simpler. “Almost 60,000 people and their families in the electorate of Robertson will benefit from tax relief of up to $530 in 2018-19.

“This is a win for all working Australians who want to get ahead. “You will have the certainty that when you earn more, get a pay rise, or work more hours, you won’t face ever-increasing tax rates,” Ms Wicks said. “Under our plan, 94 per cent of Australian workers will not face a higher marginal tax rate of more than 32.5c in the dollar, with our first priority low and middle-income earners, because we understand that the benefits of a stronger economy have not yet flowed to all.” The legislated plan ensures tax relief for middle and low-income earners, with over 10 million Australians receiving tax relief, and 4.4 million Australians getting the full $530 benefit, in 2018-19, she said.

It ensures more Australians pay less tax by making personal taxes simpler, removing an entire tax bracket, which will mean around 94 per cent of taxpayers are projected to face a tax rate of 32.5 per cent or less. “In contrast to the Labor Party, our plan is not about creating winners and losers. “We are not putting up taxes on some Australians to pay for tax relief for other Australians,” Ms Wicks said. “Under the Government’s legislated plan, the tax system works for all Australians.”