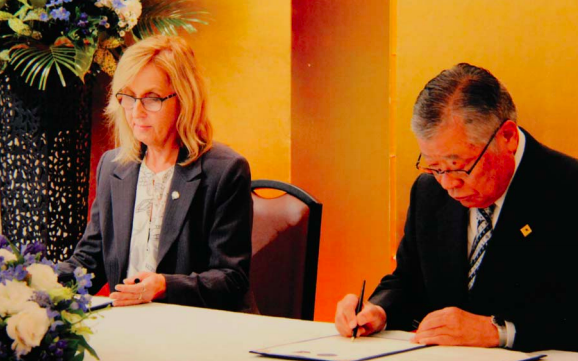 A majority of Central Coast Councillors stymied efforts by six Councillors to question the costs and benefits related to Council’s Sister Cities relationships.

Clr Greg Best’s motion had been deferred twice, but was debated when Council met on June 12. The original motion noted that a delegation of councillors had recently travelled to Edogawa, in Japan, to re-sign the Sister Cities agreement that had been retained for the past 30 years between Edogawa and the former Gosford Council. It noted that two of the Councillors who made the trip were the Mayor and Deputy Mayor, creating what Clr Best said was “an unusual leadership vacuum”.

It also highlighted the fact that Council had allocated a budget of $25,000 for the visit to Edogawa, and that between them, the two former Councils had four Sister City relationships. “It is with this understanding that Council requests the Acting CEO to confirm these arrangements, and report on whether Council now needs to set aside further funds in the 2018-19 budget for international travel as a contingency to ‘respectfully’ deal with any future re-signing invitations,” Clr Best’s motion said.

“These costings should also include what Council has budgeted for in hosting often large reciprocating sister city delegations to the Coast.” Mayor Jane Smith said she could confirm that the delegation had not spent the whole $25,000 allocated for the Edogawa trip. Speaking in support of the original motion, Clr Troy Marquart, said he believed a report from the CEO was needed to set “some pretty strict guidelines” about future expenditure on sister city relationships. “The two previous Councils did pay their own way,” Clr Marquart said. Clr Kyle MacGregor amended the motion and said the amendment sought “to do the same without some of the imputations, theatrics and irrelevancies.

“I believe it is something we do gain from, all you have to do is have a look at some of the artwork in this building,” Clr MacGregor said. He said the Edogawa commemorative garden at the Gosford Regional Art Gallery was evidence that a sister city relationship was “not just a one way street, not just a junket or people travelling overseas. “We can’t be too backward or insular on the Central Coast. “It is important that our region be included in engaging with the rest of the world.” Deputy Mayor Chris Holstein, who attended the recent Edogawa trip, said he was “a little concerned about the initial motion”.

He said he believed it was “wishful thinking” on behalf of some Councillors that the absence of the Mayor and Deputy Mayor would have resulted in a power vacuum. Clr Holstein said he believed referring to other “dormant” sister city relationships was “scaremongering”. “Edogawa had been a 30- year relationship, so to even mention the word junket is disrespectful,” he said, speaking as the longest-serving mayor of the former Gosford Council.

“I will remind Councillors there are thousands of young people in this city who have done homestays and that will continue,” he said, referring to the education and cultural exchanges that had taken place between Gosford and Edogawa students for decades. “Just as many young people have come from the Edogawa Youth Wing, it is a great program and not one that has been abused.

“I know there are some from the former Wyong Council who may think a sister city relationship may be meeting with developers to build a Chinese theme park,” Clr Holstein said. Clr Doug Vincent said he too was disappointed in Clr Best’s motion. “I am disappointed in Clr Best on how he seems to flip-flop. “When we at the former Wyong Council had debates on sending delegations to China, and even buying mayoral chains to wear to China, and having business cards printed, I can remember Clr Best, as chair of the economic and employment committee, recommending going to China.

“I am disappointed in the calibre of debate they bring to the chamber,”

he said, adding he was sure “the delegates we sent would have held the region in high esteem”.

Clr Rebecca Gale Collins spoke in opposition to Clr MacGregor’s amendment. “Residents have approached me and what they have said is they don’t want any further ratepayers’ money spent on overseas trips,” Clr Gale Collins said.

“We need a report on costings for future overseas trips and hosting trips to the Coast,” she said.

Clr Best also spoke against Clr MacGregor’s amendment: “I find it fascinating as this has nothing to do with the Sister City debate. “I don’t think anyone in this room is against sister cities, however, I just come back to the only point that matters in this room, and that is that the councillors of the former councils paid their own way. “That is it, that is the fundamental difference. “Hands up anybody out there in podcast land that thinks Councillors should go overseas on your expense.” Clr Best said many people in the Central Coast community were “genuinely doing it tough, and we think it is OK to pile up $25,000 … so the amendment is saying let’s have more sister city relationships.” Clr MacGregor’s motion, calling for a report into the future of sister city relationships, was carried, became the motion and was passed. Clr Best, Burke, McLachlan, Pilon, Macquart and Gale Collins called for a division so a record of the vote was minuted.

Those who voted for the amended motion were Mayor Smith and Clr Holstein, Mehrtens, Sundstrom, Matthews, MacGregor, Greenaway and Vincent. After the meeting, Mayor Smith said: “I’d just like to highlight the incredible value of the Edogawa City relationship. “We have derived a lot of benefits,” she said. Mayor Smith described the trip as “absolutely work, I was overwhelmed by the hospitality of the council and mayor … the re-signing of the 30 year agreement was a really significant event for them,” she said. Central Coast Councillors participated in a tree planting and Mayor Smith was the first non-Japanese person to address their chamber of 44 councillors, she said.