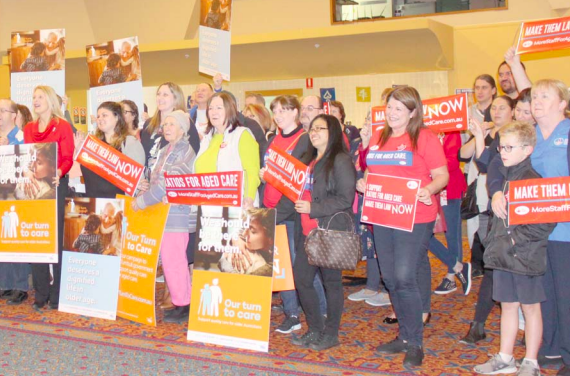 The Our Turn To Care forum, organised by the Health Services Union, heard from healthcare workers and union officials about the challenges faced by aged care workers to properly look after older Australians. HSU General Secretary, Mr Gerard Hayes, told the forum that Liberal Governments had cut $2b from aged care, creating poor conditions for residents, and the nurses and personal care assistants who looked after them. “It is not acceptable for our workers to be told to wait until a person’s incontinence pad is 70 per cent wet before changing, or that they are only allowed one set of gloves per shift, or that only $6 a day is spent on food for residents,” Mr Hayes said. “We are creating an existence for older Australians, not a life,” he added. Three aged care workers told the forum how they loved their work, but that it was getting harder. They were underpaid for the long hours they worked and risked injury because of understaffing. “We need increased wages, a binding and accurate ratio of staff to residents, improved conditions, and no bullying,” one of the workers, Ms Sue Gleeson, said. Member for Dobell, Ms Emma McBride, attended the forum and slammed the Government for failing to invest in aged care. “The government announced 14,000 new home care packages over three years in the budget, but we have 105,000 older Australians waiting for home care packages right now, and 750 of these are on the Central Coast,” Ms McBride said. “What’s even more shameful is that the government is taking money from residential care to put it into home care packages. “They are dressing it up like it is new money, but it is a hoax and they need to be called out on it. “I am so pleased that Labor leader, Mr Bill Shorten, is holding them to account,” Ms McBride said. Labor candidate for Robertson, Ms Anne Charlton, was also in attendance and said Labor would stand with unions and aged care workers to call for better pay and conditions. “People are leaving that workforce in droves, we need to stand together and fight together,” Ms Charlton said. HSU Aged Care Manager, Mr Rob Sheehy, urged everyone at the forum to sign the petition and spread the word. “These cuts have caused a deterioration in care for older people and have put increased stress on our staff,” Mr Sheehy said. “This is important on the Central Coast and this is just the beginning,” Mr Sheehy said. On the Central Coast, we have an older population, with one in five people aged over 65. Healthcare and social assistance is the biggest employer in the region, with 19,000 people, or one in six workers, employed in the sector.

Residents and frontline workers to feature in Mental Moments