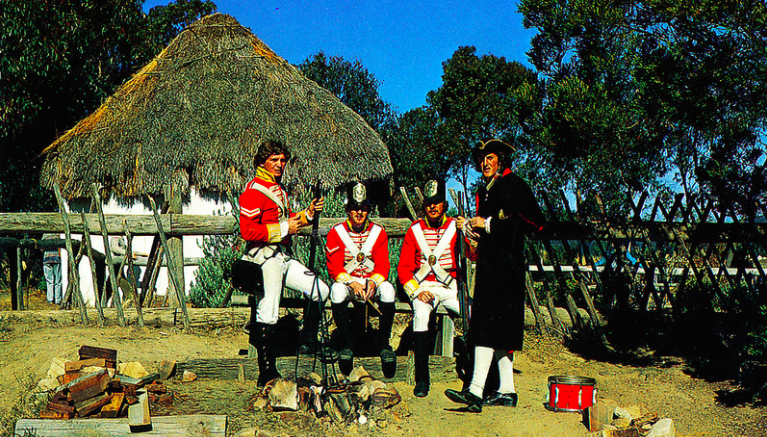 A post card from the early 1980s of Old Sydney Town

The hope for a revival of the Old Sydney Town theme park at Somersby has ended with the sale of the land to a rumoured private international consortium.

Hong Kong born billionaire, Mr Richard Chiu, President and founder of Warwick International Hotels, and owner of the 120-hectare site, had hinted at the possibility of revamping the dilapidated remnants and recreating some of the colonial magic of the 1980’s theme park that attracted over 6 million visitors to the region during its heyday. Mr Chiu told Coast Community News in 2017 that he would consider repurposing Old Sydney Town if Central Coast Council sweetened the pot by rezoning some of the surrounding land for residential and commercial redevelopment. Mr Chiu argued that this would make any reactivation of the historical theme park more financially viable, as Old Sydney Town itself only occupies 10 per cent of the landholding. Despite the idea, Council was never approached by Mr Chiu, or any of his subordinates, with any rezoning proposals and the site was put up for sale with the CBRE Group in February.

One of the CBRE selling agents responsible for the Old Sydney Town sale, Mr Victor Sheu, said there had been signifi cant interest in the site and had expected the land to sell for between $10-15m. The sale took place at the end of May, and is rumoured to have been purchased by a Chinese consortium for between $15-20 million. Due to a confi dentiality agreement, Mr Sheu could not confi rm the price or disclose the buyer’s identity, but said Mr Chiu, as the vendor, “was extremely happy”. He did confi rm that the buyer did not need Foreign Investment Review Board (FIRB) approval, which is required for offshore purchasers. The property is made up of fi ve adjoining parcels, including the Australian Reptile Park, across 5.4 hectares, and former Old Sydney Town on 25 hectares.

The remaining 89 hectares wrap around both sites and is used as a farm. The Australian Reptile Park has a 35 year lease on their site, since 1996. Mr Sheu said the buyer was looking at keeping the existing zoning. “Apart from one block in the property on the border, which is zoned E2 Environmental Conservation and cannot be developed, the remainder of the property is zoned E4 Environmental Living. “The potential is whatever’s allowable on E4 land. “It could be tourism, a hotel, a golf course, anything that’s more recreation and tourism based. “Basically that’s what the intention of the original Old Sydney Town was,” Mr Sheu said. According to Mr Sheu there had been quite a mix of interested potential buyers, all with their own vision for the land. Locally, Mr Sheu said Central Coast Council, and developer, Mr Tony Denny, had shown interest in the sale. “There was residential, there were theme parks, wave parks, personal use as acreages, you name it, we had the whole lot,” Mr Sheu said.

Old Sydney Town opened on Australia Day in 1975, with then Prime Minister, Mr Gough Whitlam, coming along to support the launch. It closed in 2003 because of financial losses, said to be up to $600,000 a year.

Central Coast residents who wished to see Old Sydney Town revived have reacted poorly to the news of the sale. Many took to Facebook to vent their disappointment.

“So sad to lose what was an icon of the area. “I went there several times, as my brother worked on the replica tall ship as part of his apprenticeship in the navy. “What is a Chinese family going to do with the site?” wrote, Ms Robyn Barco. Ms Sara Powter wrote a public post to Member for Robertson, Ms Lucy Wicks, questioning the legalities of the sale. “Lucy Wicks, can you please explain how a house on the foreshore sold to an overseas owner breaks the investment rules, but selling Old Sydney Town to another overseas owner does not? “It’s just been sold to another Chinese company, but does not seem to break the investment rules. “This stinks! “An Australian group, in conjunction with our local Indigenous people, the Darkinjung, offered nearly the same amount and were refused the purchase of this iconic property. “This has to change,” Ms Powter’s post read.

Local activist and a focal figure in the campaign to see Old Sydney Town restored, Mr Jake Cassar, also aired his distaste at the news. “Bad news for the Old Sydney Town campaign, it’s just been sold to overseas interests again, a big Chinese consortium, who may or may not try to develop all of that land or land bank it. “The government has missed out on a golden opportunity to bring hundreds of jobs to the Central Coast with a project that the Central Coast actually wants, evidenced by our Parliamentary Petition to have Old Sydney Town reinvigorated and reopened, which received over 11,500 signatures. “That is probably never going to happen now. “Good on everybody who supported the campaign over the years. “We even had $10m from a local businessman that was willing to put it on the table if Council came on board and get involved, but they ignored it. “It will be interesting to see how the community reacts when they try to develop the land in the future. “We did our best guys,” Mr Cassar said.