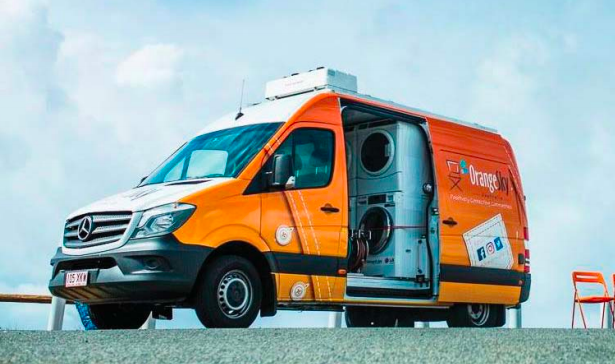 Orange Sky Australia, the world’s first free mobile laundry service for people experiencing homelessness, has been operating on the Central Coast since May 2017, and now the organisation is seeking new volunteers to help make a difference this winter.

Founded in a Brisbane garage, Orange Sky Australia was born when two 20-year-old mates, Mr Nic Marchesi and Mr Lucas Patchett, installed a couple of washing machines and dryers in the back of their old van and visited parks in Brisbane to wash and dry clothes for free. With an aim to improve hygiene standards and restore dignity to people doing it tough, they stumbled on to something much bigger and more significant, the power of a conversation.

Now facilitated by more than 1,000 volunteers, Orange Sky has expanded to 20 services across Australia, and generates over six tonnes of laundry every week. “Most importantly, Orange Sky volunteers have engaged in more than 100,000 hours of conversations to date, helping to dispel myths about homelessness and positively connect communities all around Australia, including on the Central Coast,” said Orange Sky Australia’s Central Coast Social Impact Coordinator, Ms Esther Sole.

Ms Sole’s team of 31 Central Coast volunteers operate the Orange Sky mobile laundry van, affectionately known as Tumbles, rain, hail, or shine, seven days a week, across the communities of Long Jetty, Gosford, Wyong, Umina and Woy Woy, and deliver free laundry services to those in need, wherever they go. “We were incredibly fortunate to have the wonderful Elderslee Foundation fully fund Tumbles, so we could hit the ground running,” Ms Sole said.

“Over the past year, we have been able to help so many people facing homelessness on the Coast, and we are so ready to grow our services to better suit the needs of our friends doing it tough, but to do that, we need to firstly get the word out that we’re here, and secondly, we need more people to come on board and join our team of volunteers,” Ms Sole said. Ms Sole said: “Often, when someone is experiencing homelessness, they become disconnected from society, they stop speaking to other people and vice versa, which is why Orange Sky has been so impactful.

“When a friend comes to our volunteers to use our laundry service, it often takes around an hour to wash and dry their clothes. “In that time, our volunteers invite the person to sit down and have a chat while they wait for their laundry,” Ms Sole explained. “Our volunteers have genuine non-judgemental conversations with our friends and connect them with other local homelessness services. “The feedback has just been amazing, from both the volunteers, who get an even bigger sense of fulfilment, and from our friends doing it rough, who get the chance to feel heard and valued at a time in their lives when they may not feel like that often,” Ms Sole explained.

With the recent spotlight on the region’s disparaging homelessness problem, Ms Sole said it was more important than ever that Orange Sky make their presence known. On Census night, there were 50 homeless persons for every 10,000 people, and we at Orange Sky know that there is also a large number of homeless people not counted in the Census, making these figures all the more tragic,” Ms Sole said.

According to Ms Sole, this hidden homelessness factor was also present on the Central Coast, and it was no longer a matter of postcodes separating the region’s wealth. “We’ve seen so many people sleeping rough in their cars, particularly families. “Often times, they may not fit the traditional perception of a homeless person, so it’s easy for them to go undetected and they are widespread. “It really doesn’t matter how affluent your suburb is because homelessness is everywhere on the Central Coast, as homelessness doesn’t discriminate,” Ms Sole said.