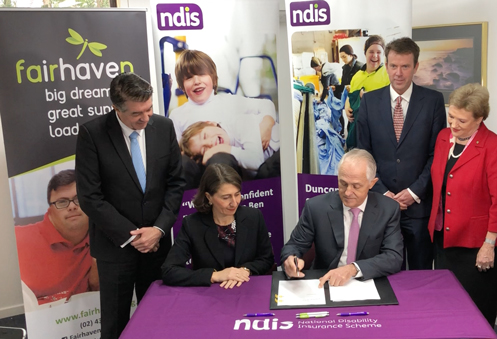 Member for Robertson, Ms Lucy Wicks, said 3,000 families in her electorate were set to benefit from the NDIS.

Mr Turnbull said the agreement signed with NSW was “a demonstration of the partnership we’ve made to secure long-term funding in NSW.” Ms Berejiklian said: “We know Fairhaven has always been a magic place, but today it becomes a historic place. “It’s the first time in our nation that the state and federal government has come together to sign the NDIS agreement. “We’re proud to be the first state to do so. “We believe strongly in supporting people with a disability, but more importantly, in ensuring they have greater control and choice over their lives through their carers and through their advocates. State Member for Gosford, Ms Liesl Tesch, was on hand to ask Ms Berejiklian about employment opportunities.

“Under your government, we have seen the employment rate of people with disabilities go from 4.7 to 2.9, with new targets not looking promising on the horizon,” Ms Tesch said. “What are we going to do in New South Wales to increase employment for people with disabilities?” she said “Not only do we have increasing policies to ensure that people with a disability have greater access to employment, but it’s one of my Premier’s Priorities to increase diversity in the workplace,” Ms Berejiklian said.

“I’ve made it one of my absolute priorities, because people with ability, I say, people with ability – and we’ve seen plenty of those this morning – have a huge contribution to make.” Member for Terrigal, Mr Adam Crouch, welcomed the agreement between the NSW and Commonwealth Governments, confirming NSW’s long-term commitment to the National Disability Insurance Scheme (NDIS). The NDIS Full Scheme Agreement sets out the ongoing governance and financial arrangements for the NDIS in NSW. Mr Crouch said it would provide clarity and certainty for people with disability on the Central Coast. “We’ve been in the transition phase as we implement the NDIS, and now we are the first state to reach a long-term agreement with the Commonwealth,”

Mr Crouch said. “People with disability, their families and carers deserve this certainty.” NSW Minister for Disability Services, Mr Ray Williams, said the NDIS represents a doubling of funding for disability services, and next year the Commonwealth and NSW Governments will commit more than $6b to the NDIS. “We can be proud of this agreement,” Mr Williams said. “The NDIS gives people with disability choice and control over the supports they receive, helps them to achieve their goals and to better participate in the community,” he said. “More than 84,000 people are already benefitting from the NDIS in NSW.”