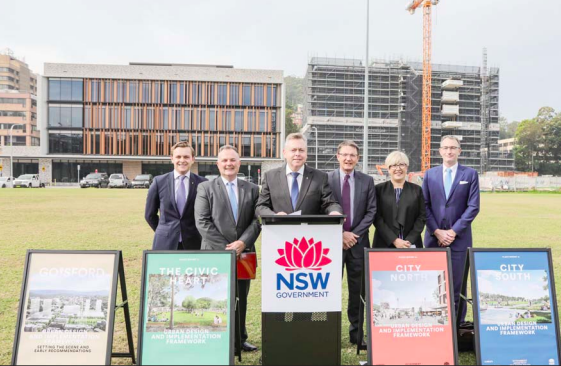 NSW Minister for Planning and Housing, Mr Anthony Roberts, visited Gosford on May 28 to announce funding of $52m for infrastructure and public space in Gosford.

Mr Roberts said his announcements were a watershed moment for the capital of the Central Coast. He said the $52m would see well-overdue work being done to upgrade the infrastructure and public domain, which will attract development, improve business opportunities and attract residents. “The time for Gosford to shine has finally arrived,” Mr Roberts said. “After listening to the community, we have developed a multi-pronged, design-led delivery to ensure the Central Coast has a regional capital it can be proud of,” he said.

“The $52m announcement involves $42m to upgrade vital infrastructure in Gosford City Centre, plus $10m for public domain upgrades. “That will include the creation of a significant regional playground as part of a major renewal of the parklands and streetscapes near the Gosford waterfront. “This funding is in addition to the $406m that has been invested by this Government on the hospital redevelopment, associated infrastructure and other city centre upgrades, further to the 300 Office of Finance and Services jobs we are bringing to the City.”

The NSW Government Architect released another two reports for the community to view and comment on. Place Report 2 focuses on connecting Gosford Hospital to the city over the train station (See separate article for more detail). Place Report 3 focuses on linking the city to the waterfront parklands in the city’s south-west (See separate article for more detail). “The Government Architect’s recommendations focus on connections between Gosford Hospital and Mann St, as well as making the waterfront parklands a destination for visitors and the community,” Mr Roberts said.

He said the new Gosford City State Environment Planning Policy (SEPP) would provide design-led, streamlined, flexible and efficient statutory development controls. “The new State Planning Policy will be supported by a new development assessment and approvals framework and case management process. “A Special Infrastructure Contribution (SIC) will also be applied to Gosford City Centre to enable the Department of Planning and Environment to collect contributions for revitalisation of infrastructure that supports growth as the program continues to roll out. “The proposal is that the overall amount to be collected will reduce from 4 per cent of the value of development to 3 per cent.

“The reduction in contributions will encourage investment and is a big vote of confidence by the NSW Government in Gosford, and a demonstration of our commitment to delivering a revitalised city centre. “The planning policy and the infrastructure contribution will align with the Government Architect’s recommendations to drive the continued renewal of Gosford City Centre.” The new planning framework will remain a stand-alone state policy until the Central Coast Council completes its comprehensive LEP, which could be some years away. Mr Roberts also unveiled the City of Gosford Design Advisory Panel, a body that brings together the highest calibre planning and design minds in the country to assess, advise and ensure design excellence of proposed developments in Gosford City Centre.

The Panel comprises NSW Government Architect, Mr Peter Poulet, Coordinator General for the Central Coast, Ms Lee Shearer, NSW Chief Planner, Mr Gary White, and two additional panel members drawn from an established group of practitioners. The Planning Department, in close collaboration with Central Coast Council, Roads and Maritime Services, and Transport for NSW, has also formed a Traffic and Parking Subcommittee to tackle the issue of car parking in Gosford City Centre. Central Coast Council welcomed the announcement. Mayor Jane Smith said investment in the CBD was welcomed, however Council would be calling for an extension to the public exhibition period to the end of July on the planning changes.

“Whilst the promise of $52m is certainly welcome, we need to ensure the proposed changes to planning controls serve the community’s best interests,” Mayor Smith said. “Council does not feel that the community will have enough time to view and comment on the draft SEPP and SIC contained in the Consultation Paper or the first two Government Architect reports and will be calling on the NSW Government to extend this timeline. “Council and the community need to examine in detail these proposed planning controls to ensure decisions for Gosford are inclusive of both Council and the community.

“Council and the community should be at the heart of the revitalisation of the Gosford city centre and it’s critical that we remain at the centre of the planning and approval process for development. “That is why I will be asking the CEO to look very closely at the announcement and ask for an urgent briefing to Council from the Department of Planning and Environment and NSW Government Architect’s Office on the implication of the announcements made, particularly relating to traffic and parking management. “We need to understand what this means for Council’s development of a comprehensive Local Environment Plan, and how they will contribute to the planning landscape, but more importantly, what it means for our community.

“In fact, we will hold at least two workshops to gauge community views and to ensure they are active participants in the future of the Gosford CBD. “There is already an approved $1.79b of developments in the Gosford CBD area, and Council is paving the way for the revitalisation of the city centre. “It’s vitally important that the announcement builds on this foundation and that the planning initiatives, proposed by the NSW Government, serve to complement rather than confuse the long-term, sustainable advancement of Gosford as the regional capital of the Central Coast.”

The Urban Development Institute of Australia NSW (UDIA NSW) also welcomed the announcement. The UDIA NSW, Central Coast Chapter Chair, Mr Caine King, said: “The NSW Government has prioritised the revitalisation of Gosford as the capital city of the Central Coast, and private sector confidence is already starting to improve. “UDIA NSW believes that realising the potential of the Central Coast for jobs, housing and lifestyle requires a coordinated approach. “To that end, the development community has supported the Government’s steps to date, namely the appointment of Ms Shearer, the use of the Government Architect to articulate a vision for the city, and the appointment of Michael Cassel as CEO of the Central Coast Regional Development Corporation. “UDIA NSW welcomes the announcement that proposals for significant new development in Gosford will be considered under new State planning controls,” Mr King said.

“Growth requires confidence and clarity,” he said. “The people of the Central Coast want a vibrant capital city that will lift the whole region. “UDIA NSW looks forward to understanding the details of the proposed State Environmental Planning Policy for Gosford, and working with Government to get it right. “The new rules can provide more clarity and certainty for developers. “They would also add an extra layer of design excellence to the review process, which developers welcome, and which would give the community confidence that we’ll strike the right balance in development.

“Gosford and the Central Coast have some infrastructure problems to solve. “We have to ensure we have water, sewer, power and roads in the right places to support the development we want. “And we really need to lift our game on public transport and connectivity. “UDIA NSW looks forward to working with Government to solve these issues.”