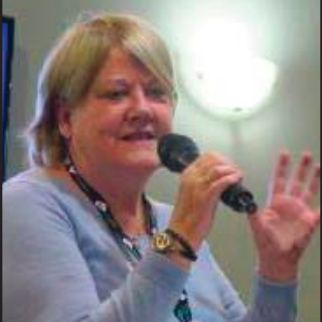 Woy Woy Rotarian Ms Bobby Redman has given a presentation about frontotemporal dementia to her club.

Club public relations director Mr Vic Deeble said: “Bobby gave us a very personal approach to the subject and along the way told us of her own gradual awareness, as a psychologist, that she was experiencing some of the symptoms of the condition. “As Bobby explained, dementia describes a collection of symptoms that are caused by a number of conditions that affect how the brain works. “It can affect thinking; behaviour and the ability to perform everyday tasks. “She added that it can affect memory, language skills, spatial awareness and the senses of touch and smell; judgement and attention.

“In fact, she observed her own sense of smell becoming less sensitive and was now aware that she was not as stable as she had been and had to be more careful going downstairs,” Mr Deeble said. Ms Redman spoke about how friends who had known her for many years, were among the first to pick up that she was not functioning as she had been in the past. “The doctor initially did not believe Bobby, but tests found that she was exhibiting some of the symptoms of frontotemporal dementia. “This condition particularly affects the ability to remember names,” Mr Deeble said. “She said that there was a stigma associated with dementia that was not associated with cancer. “People dismiss it as a condition. “People don’t treat it seriously and make jokes about it. “Bobby researched the subject and has been active with various dementia bodies such as Dementia Australia and Dementia Alliance International. “She continued with facts about dementia, such as there are 400,000 people living with dementia in Australia and another 1700 are diagnosed every week,” Mr Deeble continued.

“There are currently 1.2 million carers for people with dementia and by 2050 there will be over a million people with dementia. “There are several types of dementia: Alzheimer’s disease, vascular dementia, frontotemporal dementia, Lewy Body disease and other degenerative diseases,” he said. Ms Redman went on to say that. while there was no cure, there were recognised ways to reduce the risk or slow down the progression of the condition. They are: physical exercise, eating habits, mental stimulation, stress reduction and social interaction. “Bobby concluded by encouraging us to participate in the Dementia Friendly Communities program,” Mr Deeble said.