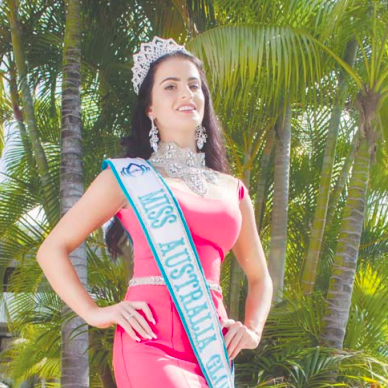 C h e l s e a - A n n e Lewis, has been crowned the winner of the Miss Australia Global Pageant

Jilliby resident, Ms Chelsea-Anne Lewis, has been crowned the winner of the Miss Australia Global Pageant.

On April 20, after three days of pageant preparation, photoshoots, interviews, rehearsals, charity visits and bonding with fellow contestants, Ms Lewis was crowned the winner. In the lead up to the pageant, Ms Lewis had spent weeks getting out and about on the Central Coast, organising community and charity events in support of Variety the Children’s Charity and the Irukandji Shark and Ray Centre.

Ms Lewis also addressed Central Coast Council about the nation’s recycling crisis. A cleaner, greener Central Coast is a vision of Ms Lewis’, who organised a community clean out of Lions Park as one of her campaign events. On top of taking out the overall title, Ms Lewis also took out the Best in Swimwear, Best in Interview, and Miss Media categories. “I also came second in the Charity Sector category, raising over $1,000 over April,” Ms Lewis said. “I am now heading to Jamaica in September to represent Australia on the world stage along with one representative from each country. “I have been blessed that my work was recognised and deemed good enough for this huge opportunity,” Ms Lewis continued.

Speaking to the Wyong Chronicle, Ms Lewis took some time to reflect on her love of pageants and how they help propel young women towards becoming more well rounded and thoughtful community members and advocates. “There is a huge stigma around the world of pageantry, due to some very unrealistic American reality television series,” Ms Lewis explained. “I started doing pageants four years ago, and this was initially just me taking a chance on an offer I had never really ever considered. “From there I was hooked.

“I quickly realised that pageantry was truly based around developing one’s self, your character and about gaining life skills,” Ms Lewis said. “The judging criteria promotes community engagement, charity fundraising, awareness of the power of social media on shaping public image, close exposure to multiple personalities, confidence and self belief, communication skills, and self-esteem. “It shapes women around strong values and a sisterhood which not many people think of when pageantry is mentioned. “Over my time competing, now I look back and I can’t believe how much I have grown as a person and how much more confident I have become,” she continued. “With the international finals now in view, I’m looking for more causes to support with a focus on local youth organisations and environmental matters,” Ms Lewis concluded.