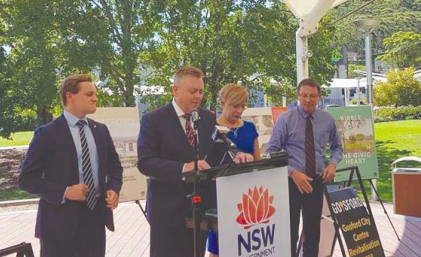 The NSW Government Architect has released the first of three recommendations for the revitalisation of Gosford, and the State Minister for Planning has announced a repurposed Central Coast Regional Development Corporation to drive investment in the city.

The Government Architect’s first proposal, to turn Kibble Park into a city square, was placed on public exhibition on April 9. “The plan is to create a regionally-significant city square, that strengthens connectivity and improves the city’s commercial, retail, lifestyle and cultural life,” said NSW Minister for Planning and Housing, Mr Anthony Roberts. Mr Roberts visited Kibble Park to announce that he had appointed Mr Michael Cassel, as the new CEO of the CCRDC.

According to the Minister, while the Department of Planning and Environment coordinates the delivery of the Urban Design Implementation Framework (UDIF) for Gosford, the CCRDC will identify development opportunities to drive economic growth. Mr Roberts said Mr Cassel’s appointment was part of repurposing the CCRDC to support delivery of Gosford City Centre’s renewal. “Mr Cassel coming in as part of my team, signals to everyone that I am serious, and this government is serious, in delivering to the people, not just of Gosford, but the Central Coast,” said Mr Roberts. Mr Robert’s said Mr Cassel’s proven record in delivering the revitalisation of Newcastle meant he had the capacity to recognise and build on the potential of Gosford. Mr Cassel will continue as CEO of Hunter Development Corporation.

“I want to be very clear, the Central Coast is not Newcastle and Newcastle is not the Central Coast,” Mr Cassel said. “They are two different areas, but the same philosophies will apply for the organisation that I lead, and that’s all about collaboration and working with the key stakeholders,” he said. “I look forward to working with Coordinator General for the Central Coast, Ms Lee Shearer, Central Coast Council and many other stakeholders, to help bring the bold vision for the region, and its capital, to life,” Mr Cassel said. Kibble Park has been labelled the civic heart of the Gosford city centre in the development plans. NSW Government Architect, Mr Peter Poulet, said: “It is crucial that the first stage of the project to revitalise Gosford City Centre concentrates on the very heart of the region’s capital.

“Our focus is to enhance Kibble Park to create a significant area for people to gather and celebrate, a centre that is both a green space and a place of civic and commercial activity. “Our focus on Kibble Park and the heart of the city is strategic in intent because it brings together a whole lot of opportunities that have currently been slow in the uptake. “Gosford, with its potential, is only going to grow from its centre. “The potential to revitalise the city centre is a gift to the people here,” Mr Poulet said. Mr Roberts said, “The idea is to concentrate on investment and new offices, shops and cafes, to bring life back to the edges of Kibble Park.” Central Coast Council has welcomed plans to activate Gosford CBD. Mayor Jane Smith said Council planned to look closely at the proposed activation. “Council is pleased that the Government Architect has released the plans for the public to see and I can assure you that our staff will be looking closely at these over the coming weeks, and preparing a report for Council,” Mayor Smith said. “As the closest tier of government to this, Council needs to be at the centre of decision making going forward,” she said. “Whilst we welcome the design principles, the devil can be in the detail, so we need thorough, open and transparent consultation as we progress these plans to reality. “Some of the issues Council wants to understand in the Government Architect’s plans include: what the proposed Gosford CBD activation will deliver for business and the community; how it will stimulate economic development; the impacts on traffic, congestion and parking; impacts on local planning controls and consents; and, how these plans align with the long-term vision for the city of Gosford.”

Mr Roberts and Mayor Smith agreed that the announcement was a step forward in creating a vibrant and sustainable region that the Gosford community wants and needs. Mayor Smith said she encouraged the community to play an active role in the ongoing discussions concerning their city. Parliamentary Secretary for the Central Coast, Mr Scot MacDonald, said, “Central Coast people are desperate to see action on revitalising Gosford’s CBD, and today’s announcement has delivered stage 1 of that action to deliver a thriving, prosperous capital that this region needs and deserves. “It is fantastic to have this first report from the Government Architect released for public exhibition to give the community ample opportunity to provide feedback and have their say,” Mr MacDonald said.

“With the NorthConnex coming, only about a year away now, we’ve got people moving backwards and forwards there, we’ve got industry coming, $348 million dollars spent on the hospital, it’s all happening, it’s now about taking those next steps,” he said. Ms Shearer also said she welcomed the release of the discussion paper. “This report is a blueprint on how to inject lifeblood to ensure Gosford’s civic heartbeats as strongly as it can, which is vital to the continued revitalisation of the region’s hub,” Ms Shearer said. Mr Taylor Martin, Member of the NSW Legislative Council, said: “We will hear from some saying that this is just another plan, but it is not. “We now have the resources, thanks to the State Government, to revitalise Gosford and deliver what’s needed.” Mr Roberts said: “I’ve put together a team of proven doers, a team of proven achievers.

“What the Central Coast needs most of all is the support of the State Government to bring those plans together – provide funding where it’s required. “It certainly has not reached the potential it deserves, but following this, not anymore,” said Mr Roberts. “There’s been a large amount of discussion and consultation about that journey, and we are embarking on that journey today, with this announcement. “The prosperity for Gosford and the Central Coast is now the key priority of the NSW Government.” Two further reports are due to be released in coming weeks which focus on the Government Architect’s vision for the corridor between Gosford Hospital to the train station in the north and the Waterfront precinct in the south.

Respect and take on social distancing and hygiene measures – Wicks