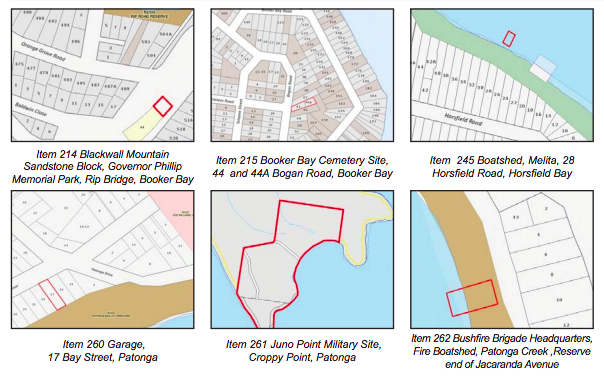 The planning proposal will be on public exhibition until April 19 at the Gosford office of Central Coast Council or online at yourvoiceourcoast.com.au. The items were identified as part of a community-based heritage study commissioned by the former Gosford Council and undertaken to fulfil Council’s statutory responsibility to manage the heritage of the Local Government Area. “The community-based approach to the heritage is a recommendation of the Heritage Division, Office of Environment and Heritage NSW,” the exhibited proposal stated.

“This approach provides the opportunity for communities to make a valuable contribution to the heritage study, with the appropriate guidance from Council staff and the heritage consultant. “Members of the community worked alongside the consultant for the duration of the project. “They undertook research, nominated items and considered recommendations for managing and promoting their local heritage items in the future. “It was, however, the heritage consultant and council staff that made the final decision on what items are on the list of potential heritage listing.”

The Environmental Planning and Assessment Act 1979 (EP&A Act) requires Council to identify and protect heritage through local environmental plans. The items will be added, along with others from across Gosford to the 221 items of both local and State significance already listed in the GLEP 2014 or the IDO 122. Two Booker Bay items were included in the final planning proposal: the Blackwall Mountain sandstone block at Governor Phillip Memorial Park near the Rip Bridge and the two Norfolk Pines that mark the location of the Booker Bay Cemetery site understood to be the resting place of victims of the Maitland sinking.

The property Melita, a boatshed and house on Horsfi eld Bay Rd, was the only item listed for Horsfield Bay. Nine Patonga landmarks will be listed as new heritage items if the proposal is adopted. They are the Patonga Progress Hall, a shop at 13 Bay St, a garage at 17 Bay St, the Bushfire Brigade Boatshed at Patonga Creek Reserve at the end of Jacaranda Ave and the Old School House also on Jacaranda Ave. Two Patonga houses have also been included: Jacaranda Lodge and a property in Patonga St. Significant trees on the foreshore reserve adjacent to Bay St were also considered worthy of listing, along with the Juno Point military site at Croppy Point. 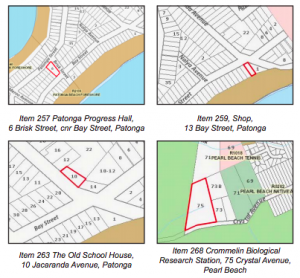 Heritage sites on the Peninsula 2

A cottage and garden on Mt Ettalong Rd, Umina, was also listed. Woy Woy landmarks considered worthy of inclusion for their heritage significance were the former Rural Bank on Blackwall Rd and the Woy Woy Public School. Four Woy Woy houses were included in the planning proposal: two on Brick Wharf Rd; Fenton, its fence and steps on Orange Grove Rd and Wyworrie on Blackwall Rd. The Waterfall Bay Rock Carving off Woy Woy Bay was included and the Woy Woy demolition tunnel and chamber which is a portal of the Woy Woy Tunnel.

An archaeological item at Ettalong was also included: the remains of a boatshed on the foreshore of Ferry Rd. The Basalt Quarries Railway, located in Brisbane Water National Park near Woy Woy tip, also made the list. Klein’s Cabin located on the eastern side of Patonga Creek will also be included. In addition to the items that formed part of the planning proposal, Woy Woy Railway Tunnel on Woy Woy Rd was recently added as an item of State significance. The inclusion of the items as heritage items will assist in their conservation by providing statutory protection and conservation incentives, according to the planning proposal. Central Coast Council is also progressing a planning proposal to consolidate all its planning instruments under a draft Central Coast LEP. “Depending on the timing and progression of this planning proposal the additional heritage items could be incorporated into the draft Consolidated Central Coast LEP.” The proposal has already been through three periods of public consultation.