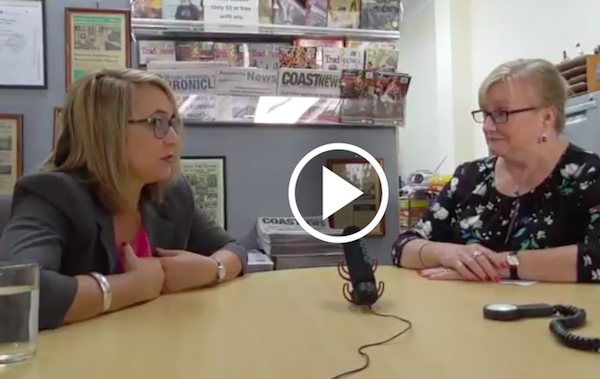 C lr Rebecca Gale Collins believes it’s time for Gosford City to come out of its time warp and get moving.

In the latest edition of Central Coast Newspapers’ Video News, Clr Gale Collins speaks with Jackie Pearson about her reasons for volunteering to join the Central Coast Council’s Economic and Employment Advisory Group and Gosford CBD and Waterfront Advisory Group. They are connected to her reasons for running for Council in the first place. “I guess it was just that I thought with the regional plan 2036, for the sake of my children, I really thought this was the opportunity for me to make a difference for my kids,” Clr Gale Collins said. “There is movement in Gosford,” she said.

“But ultimately it is stuck in some sort of time warp. “I think you walk around and there is so much potential: we have got the rail, we have got the hospital and we have got the waterfront. “It is about connecting it and we need a lot more movement, we need a lot more money coming in and we need beautification. “If we don’t do it now when are we going to do it. “Work the architect is doing is just the beginning and the work that has to be done starts with the architect and those committees,” she said. Clr Gale Collins said she did believe there was a sense of cohesion between the 15 Central Coast Councillors in terms of working together to improve and grow the entire Coast but it could not all be done at once.. “So let’s start with Gosford,” she said.