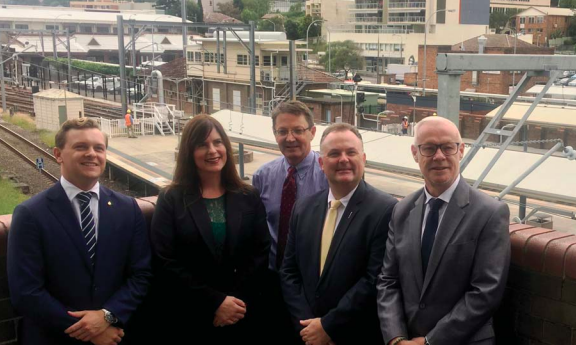 Federal Member for Robertson, Ms Lucy Wicks, was joined by local state parliamentarians and a business leader, at Gosford railway station, on Friday, March 9, to announce that the NSW Government would receive Federal support to look at how to cut one hour off the train trip between Sydney and Newcastle.

“The Federal and State Governments are announcing that the NSW Government will be one of three successful cases, as part of the National Rail Program, to look at how we can speed up the journey between Newcastle and Sydney, from an average of three hours to two hours,” Ms Wicks said. Ms Wicks said the Federal Government was making $20m available, to be shared by all three business cases. “We’ve got around 30,000 commuters, so many of them leave their homes early in the morning and return home late at night, and I know when I’m standing on the train station in the morning greeting them, that one of the things that they often raise is, “how can we get a faster journey to Sydney or to Newcastle?” she said. “The Sydney to Newcastle Corridor was one of the regions chosen as part of a highly competitive tender process, which speaks volumes for the future of this region. “The business case, once that’s completed, as the project is expected to cost over $100m, would then go for assessment to an independent body called Infrastructure Australia. “This is certainly a giant leap forward and a fantastic next step for Central Coast businesses and commuters.

“I acknowledge there is difficult typography and terrain, particularly that stretch between Woy Woy to Hornsby. “I think there are no less than seven tunnels that need to be navigated, so it is a very difficult challenge, but I think that the improvements that it would bring for Central Coast residents, the housing supply it would open up, the job opportunities that it would bring to people here in Gosford and indeed the entire Central Coast, it’s a huge consideration, it’s a huge opportunity. “Taking this next step is a very important first step,” she said. The business cases are expected to be delivered over the next 12 months, and the Turnbull Government’s funding for the business cases will be combined with funding provided by the project’s proponents, the NSW Government in this instance. The intention of this process is to develop detailed proposals for faster rail services between major cities and surrounding regional areas. NSW Parliamentary Secretary for the Central Coast, Mr Scot MacDonald, said National Rail Program business cases had been selected across the country.

“For the Central Coast to be one of those trials is incredible,” Mr MacDonald said. “So for the first time, we’ll get some rigour, some business costing, some design, around that, and from the State Government’s perspective, I think this neatly complements what we’re doing over the next year or so with our $2.3b dollar new intercity fleet that is starting to roll out in 2019,” he said. “If we can marry that up with what Lucy’s talking about, improvements to this critical corridor, I think that bodes very, very well for the Central Coast,” Mr MacDonald said. “This is a great step forward to have a business case being put forward, one of three in the country,” said Member for Terrigal, Mr Adam Crouch. “I know that people in my electorate are pleased and excited about the possibility of travel times being improved, so this is a really exciting time for everybody in the Terrigal electorate as well,” he said. Member for the NSW Legislative Council, Mr Taylor Martin, said some of the strategies that could be examined to reduce travel times included “straightening the rail tracks, removing deviations, having a look at level crossings and improving the safety for commuters. “I used to do this commute day in, day out, and I’m very aware of the impact that it has on the quality of life for those on the Central Coast who seek employment outside of their own region.

“I’m pleased to see the Federal Coalition Government, working with the state Coalition Government to deliver a long-term plan,” Mr Martin said. Mr Rod Dever, President of the Gosford-Erina Chamber of Commerce acknowledged Ms Wicks’ advocacy. “This opportunity presents so much for commuters, into and out of the Central Coast, and that creates opportunities for business, by looking at things like improving safety, improving travel times and reliability. “It gives more confidence to businesses when they are considering employment opportunities for people from the Coast, and more confidence for businesses to come and set up their business here on the Coast and to increase the current level of business that they work in,” Mr Dever said.

“The business case will investigate works including reducing track curvature, deviations and realignments, removal of level crossings, junction rearrangement and better segregation of passenger and freight services,” he said. “The combined funding commitment by both levels of government to fund this initiative endorses the need for progress and improvement. “Accessibility and reliability of our rail services and required supporting infrastructure has been a topic of discussion for many years. “Over this time, various groups have touted options of high speed rail, dedicated freight lines and new facilities to improve our linkage to the city and regional transport hubs, however, no one has ever come to the table with funding to allow for a true assessment of needs and the viability of any actions to take place.”