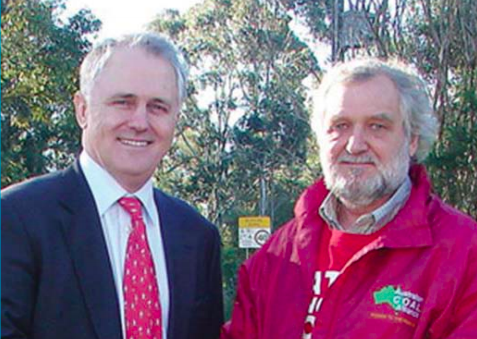 Prior to becoming Prime Minister, Mr Malcolm Turnbull had been supportive of the Australian Coal Alliance; now Mr Alan Hayes (right) hopes Minister for the Environment, Mr Josh Frydenberg, will stop the mine

Federal Minister for the Environment and Energy, Mr Josh Frydenberg, has officially extended the time in which he has to make a decision on whether to approve the Wallarah 2 Coal Project.

Mr Frydenberg is responsible for approving Wallarah 2 as a Controlled Action under the Federal Environment Protection and Biodiversity Conservation Act (EPBC Act), 1999. “The relevant period in which the Minister must make a decision whether or not to approve the controlled action is extended by 126 business days, to September 7,” The Department of the Environment and Energy’s official notification said.

“This specification is provided for the purposes of section 130(1A), 130(1B) and 130(4) of the EPBC Act,” it said. The proposed action being considered under the EPBC is to construct and operate an underground coal mine 4.7km north-west of Wyong, and the variation of the proposal approved on September 9, 2016. Mr Alan Hayes of the Australian Coal Alliance (ACA), who met with Mr Frydenberg at Parliament House in Canberra on Monday, February 26, said the Minister had asked for a comprehensive understanding about the social and economic impact of the proposed Wallarah 2 coal mine on the community.

Mr Hayes said the meeting with Mr Frydenberg had been arranged by the Federal member for Robertson, Ms Lucy Wicks, who had made it clear she was taking the community’s concerns about the mine very seriously. “It is good news that he wants to know about the impact the mine would have on people’s lives and people’s homes, because there are 240 homes that would subside by between one metre and 2.6 metres, and they have never been properly consulted,” Mr Hayes said.

“There has never been a social licence, the people of this community have never said this mine is OK,” he said. “Obviously Mr Frydenberg has taken this issue very seriously, and ACA has already heard from The Department of Environment and Energy’s northern NSW Director of Environmental Standards,” he said. Mr Hayes said he believed the current Minister was aware of the Howard Government’s opposition to the mine. “I am very pleased with Mr Frydenberg because he is at least showing that he is a man of his word,” Mr Hayes said.