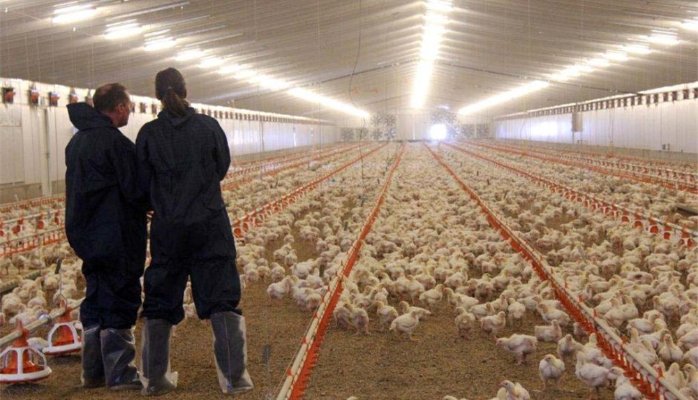 Inside an intensive poultry shed

Community opposition is growing to the expansion of intensive poultry farming in the Coast’s mountains district.
Two applications, worth $2.5m in total, to expand existing sheds and build new ones have been approved by Central Coast Council, under staff delegation, since October.
The approvals will potentially increase the number of birds farmed in the area each year by hundreds of thousands.
Central Coast Mayor, Jane Smith, said she was aware that a number of councillors had a meeting with concerned residents and Council staff representatives in late 2017.
“They certainly got a sense of the concerns of the local community,” Mayor Smith said.
Mountain Districts Association spokesperson, Ms Marilyn Steiner, said that she had made a submission about one such development, but believed that her concerns had been largely ignored by Council.
Ms Steiner said the approval under delegation of DA52014/2017 for the $1 million redevelopment of a designated and integrated poultry farm at 2635 Wisemans Ferry Rd, Mangrove Mountain, was a case in point.
According to the assessment report, the site contains four naturally ventilated poultry sheds, and permission has now been given to build two new tunnel ventilated poultry sheds, 18 metres wide and 150 metres long, located to the east of the existing sheds.
The new sheds and extension to the existing sheds will take the total bird population to a total of about 222,000 at a time, or 1.22 million per year, based on an average of 5.5 batches per year.
The subject site is zoned RU1 Primary Production under Gosford LEP 2014.
The proposed development is defined as Intensive Livestock Agriculture and is permissible in the zone with Council consent.
According to Council’s assessment report, one shed will be partially installed over an existing drainage swale that crosses the promises.
“The proposal is to redirect drainage and circumvent around the shed footprint leading to Ironbark Creek, this is adjacent to a sediment detention basin to be installed on site which collects water from the hardstand and overflow from collected roof waters.”
Council noted that it had not received any complaints regarding environmental incidences from the premises.
The proposed tunnel sheds will be constructed with 10-12 ventilation fans at the southern end of each shed, and airflow through each tunnel shed is approximately 20,000 cubic feet per minute.
Ms Steiner said she was concerned that several NSW Government agencies, including the Office of Water, failed to respond to the DA within Council’s timeframes.
She said she believed the concerns raised in her submission were not addressed in the assessment report.

“Our main concern is with contamination and/or interference with Ironbark Creek,” Ms Steiner said.
“We have a large dam on this creek a short distance downstream,” she said.
“It is already seriously affected by nutrient overload from farm operations bordering the creek upstream.
“Algal blooms covering the whole dam are common, and what was once platypus habitat when we moved there 18 years ago, is now a haven for European carp, which at least keep the water weeds down.
“As far as we are aware, there is no monitoring by regulatory agencies of the creek, so further degradation is unwelcome.
“The development for which approval is sought has a first-order stream of Ironbark Creek on it, and the property borders another arm.
“We are not convinced that they are being adequately protected or considered,” Ms Steiner said.
Ms Margaret Pontifex of the Mangrove Mountain Districts Community Group Inc said she had written to Mayor Smith asking for the setting of strict guidelines on the poultry industry.
“The time has come where enough is enough; our community and natural environment can’t continue to exist with the present ‘no restrictions’ setup,” Ms Pontifex said.
“The mountain area is dependent on an ancient porous uplifted aquifer that is being depleted (in part) by total reliance on it by the poultry sheds,” she said.
“The industry stopped using surface water in 1960.
“The air quality from these sheds is rapidly worsening and is not safe; both the odour and the mist of fine particles is not acceptable any more.
“The volume of trucks servicing the recent increases in size and number of sheds is beyond what our local roads can safely cope with.”
Ms Pontifex said the community was also increasingly concerned about permanent damage to natural areas.
“The national parks set up over many years are stressed by depleted springs, dust fallout, foxes, wild dogs and chicken carcasses disposed of in the bush because of mortality increases.
“I expect to see large-scale contamination of water courses as the masses of manure and chemicals wash into them.
“The loss of biosecurity is major since the original distances from the others farms, sheds and homes have been ignored.
“I don’t want to think about a repeat of the 1999 disease outbreak as there would be a lot more than sea eagles found dead,” Ms Pontifex said.
Ms Pontifex said she believed there needed to be an immediate cap on the number of birds per farm, restrictions on the number of farms and the distance between them, prohibition of the use of ground water, ventilation to stop dust and odour, and a permanent storage system to stop contaminants leaving poultry farms, especially in storm events.
Mayor Smith said she did not believe Council had the authority to place such restrictions on the industry.
“The other opportunity for residents to have input is the consolidated Local Environmental Plan (LEP) which is coming out for community consultation very soon,” Mayor Smith said.
“I am not sure the LEP will be able to put limits on shed sizes, but it will have zonings in it and people can make submissions on zoning,” Mayor Smith said.