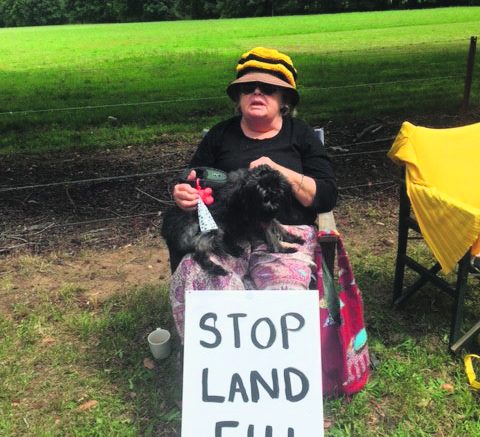 A knitting Nanna shows her opposition to the landfill

Acting CEO of Central Coast Council, Mr Brian Glendenning, has indicated it is likely, but not guaranteed, that Council will take further legal action against the operators of the Mangrove Mountain Landfill.
Addressing the first meeting of the Mangrove and Spencer Advisory Committee, Mr Glendenning said that Council’s function in relation to the Mangrove Mountain Landfill was as consent authority.
“We are in the middle of a detailed and intense investigation into compliance with the development consent,” Mr Glendenning told the meeting.
He said Council was taking the investigation and its role “very seriously” and was waiting for further legal instructions.
“The factual history is complicated and we are taking our role as consent authority very seriously,” he said.
Council had received a complaint about the site as recently as the week prior to the first committee meeting, and he believed there was a “high prospect of further litigation”, but that it was “not guaranteed”.
Mr Glendenning explained that his knowledge of the issues at the landfill pre-dated his current role and the merger of Wyong and Gosford Councils.
He said as a former Wyong Council employee, the former council had a “particular perspective on site”.
A former senior Gosford Council employee who has been assisting the Mountain Districts Association with its research, Mr Gary Chestnut, said he had a “very good understanding of how the Mangrove Mountain landfill ran off the rails”.
He said he had a lot of information he wanted to share with his fellow committee members and Council staff.
In a written statement in response to questions from Coast Community News, the NSW Environment Protection Authority (EPA) said the landfill had not received any waste since May 2014, and although the Environment Protection Licence for the site remains in place, it would need to be amended prior to receiving waste again.
The NSW EPA confirmed that it would require recommendations from last year’s independent environmental assessment of the site to be adopted as part of any proposal to recommence landfilling operations.
“The EPA is committed to partnering with Central Coast Council to ensure ongoing productive joint engagement with the community on these matters,” the statement said.
In a presentation to the first meeting of the Central Coast Council’s Mangrove Mountain and Spencer Advisory Committee, Dr Stephen Goodwin of the Mountain Districts Association (MDA) said the final report from the independent environmental assessment was released in July 2017.
“The report contained 61 recommendations,” Dr Goodwin said.
“The EPA claims that they have required the Operator to adopt the review’s recommendations, but MDA is aware that only some of them were requested to be adopted.
“MDA has recently communicated with the present Executive Director of the EPA, Waste and Resource Recovery Branch, for an explanation.
“The EPA has more recently commissioned an independent review of interim environmental controls including the stability of the existing waste mound.
“This is ongoing.
“MDA has been excluded from this review.