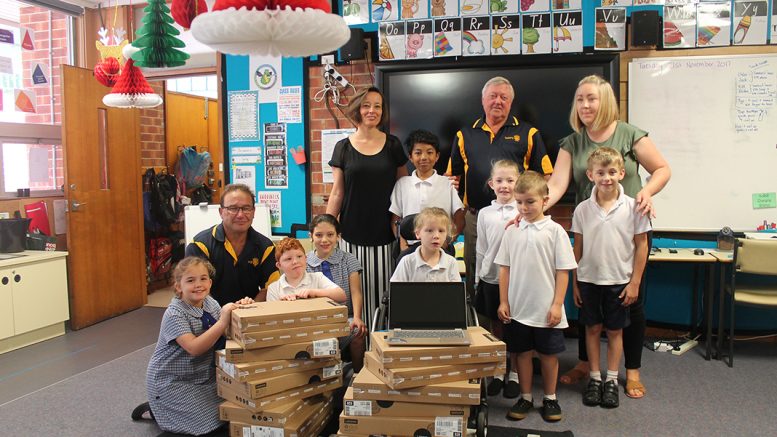 Gosford Rotary Club has supplied 17 new computers to Chertsey Primary School to aid the school’s children with additional needs.
When anxious mum Ms Amanda Harvey contacted the Rotary Club of Gosford she had little idea of the sequence of events she had set in motion.
Like all mothers, Ms Harvey, wants the best for her children.
Ms Harvey has two children who are both hearing impaired.
She reasoned that early learning of computer skills would greatly enhance her children’s future development and employment opportunities and that’s when she decided to contact Gosford Rotary.
Past President, Mr Barry Henwood, could see she had a pretty good argument and so he went along to Chertsey Primary School to see for himself.
“I was completely blown away,” said Mr Henwood.
“Chertsey is in a beautiful bushland setting and I had no idea it was the only primary school on the entire Central Coast that has special classes for the hearing impaired.
“From kindergarten to Year 6, children come to Chertsey from as far as San Remo in the north to Umina Beach in the south, and little wonder when you look at the quality of special education,” Mr Henwood said.
Chertsey has two special education classes for the hearing impaired and both teachers, Ms Linda Fantoni and Ms Kirsten Gorsky, have Masters Degrees in Special Education.
With further skills for the hearing impaired, Ms Fantoni takes the new arrivals for the first few years to establish a communication medium, then hands over to Ms Gorsky, who sees them through to Year 6.
The initial approach to Gosford Rotary was for just one computer, but the need and the opportunity to help was just too much for the blokes at Gosford Rotary.
“When I took the opportunity to the board and current President, Mr Jim Katrikilis, he gave it his enthusiastic support, it was the easiest decision we’ve made in years.
“Someone just said why don’t we give them all a computer and we all put our hands up,” Mr Henwood said.
Mr Katrikilis said, “It’s good to build parks and shelters and to support bushfire appeals and things like that, but after nearly 20 years in rotary, I can’t recall anything more satisfying as donating 17 computers to help these kids get a good start.”
While Rotary had to dig deep for the money, their load was made much lighter with the wholehearted support of Harvey Norman’s Erina store, and its immediate wish to help such a community project.
“It might take a while but with a computer for every child, I’m confident we can offer individual tuition and they will love it,” Ms Fantoni said.

Council invites elderly to run their own centre