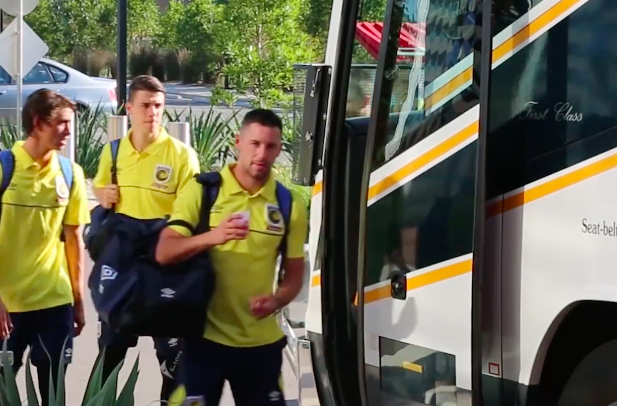 Two substitution players Lachlan Wales & Blake Powell combined for the equaliser against Melbourne Victory in a tough game played in Geelong. The 1-1 result a win of sorts for the gallant local team.

Less than a minute after Powell & Wales came on at 69 minutes, Wout Brama hit a precision diagonal long ball to the feet of Wales on the left wing who charged into space. Wales expertly found fellow substitute, Blake Powell in the box who tapped home the equaliser.

Keeper, Ben Kennedy made an outstanding save in the 17th minute but Berisha was there to jump on the spoils, the Albanian looked certain to tap home from point blank range but a lunging Antony Golec came from nowhere to get a foot in and deny Victory the opener.

In between the two Berisha chances, the Mariners created a promising moment of their own when Andrew Hoole tried to curl one in from just inside the area, the shot deflected off Victory’s Dino Djulbic and Lawrence Thomas was able to just clean up before an ensuing Kwabena Appiah could take advantage.

The Mariners most dangerous moments came on the left through the combination of Storm Roux in his new position at left back and Connor Pain who both linked up well with Hoole on a number of occasions.

As the second half drew on, the momentum tipped in favour of the Mariners who managed two chances in quick succession in the final moments of the half. The second being the aforementioned equalising goal.

Coach Paul Okon said ““The plan was always to bring them both on at the same time [Wales & Powell]. We needed that spark that they provided but that’s why you make subs, is exactly for that. Whenever we’ve done that this season our subs have played their part and that was no different today.”

In the end, both teams settled for a point in Geelong, which has the Mariners sitting just four points outside the top six.

The Mariners play an inform Newcastle Jets in Newcastle on Tuesday evening for the #F3derby . Fans are urged to attend the match, a fan travelling bus has been arranged and members are reminded that the will gain free entry to the game.