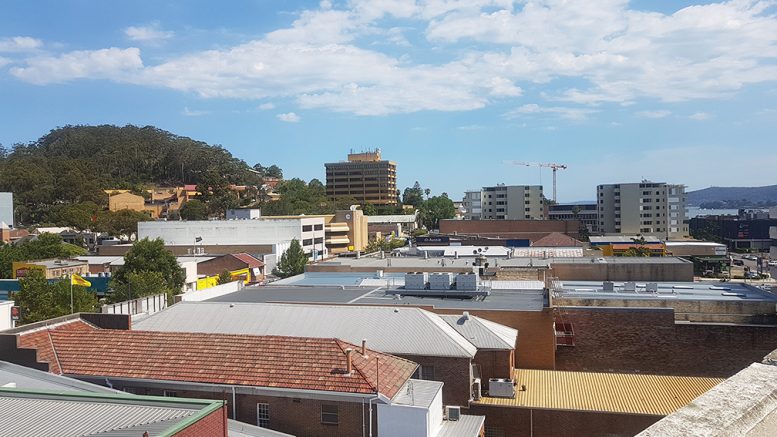 Another view of the Gosford CBD skyline which could be changed by future development controls Photo: Justin Stanley

Central Coast property values will continue to rise in 2018, because of a significant investment in the region’s infrastructure, according to Raine and Horne.
Brett Hunter, Director of Raine and Horne, Terrigal/ Avoca Beach, said that the Central Coast is a key beneficiary of regional infrastructure projects outlined in the 2017-18 NSW State Budget, and this financial injection will drive up demand for, and capital values of, real estate in 2018.
As a guide, $188.3 million has been allocated for the Central Coast’s roads, including widening of the M1 Pacific Motorway between the Kariong interchange and the Somersby interchange, and Pacific Highway widening between Lisarow and Ourimbah.
These developments represent a $6 billion injection of funds into the region, which will lend additional support to local business and employment.
Additionally, there is a huge increase in apartments sold off the plan in and around Gosford, with over 90 per cent sold off the plan for many different developments, noted Mr Hunter, who is the Vice President of the REINSW.
“The back end of 2018 and all of 2019 will see over 600 new families moving into the Gosford area, and this will drive up residential values,” he said.
“The Central Coast is ripe for a population and commerce explosion, and with infrastructure projects such as the massive Gosford Hospital refurbishment, extra trains to Sydney, the completion of the ATO building that is expected to house 600 employees, and other major projects, real estate markets such as Terrigal, Avoca, Copacabana and Macmaster Beach are set for a strong showing in 2018.”
In addition, NorthConnex, linking from the M1 to the M2 in Sydney, which is due for completion in 2019, is propelling enquiries from Western Sydney residents seeking a lifestyle change to beachside suburbs.
“In combination, more jobs and improved infrastructure should help average Central Coast real estate values grow by between 5-8 per cent in 2018, and shield us from steadying conditions in Sydney,” said Mr Hunter.
“In the past, property markets in Terrigal, Avoca, Point Frederick and Macmasters Beach were highly dependent on Sydney,” said Mr Angus Raine, Executive Chairman, Raine and Horne Group.
“However, the region’s property markets are now supported by a more diversified economy that will be enhanced by improved infrastructure and a growing population that is increasingly detaching it, to an extent, from the ebb and flow of Sydney real estate,” Mr Raine said.