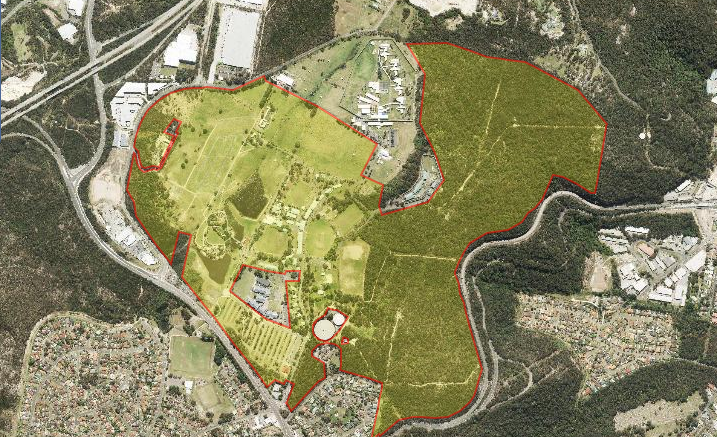 An aerial view of the Mount Penang site

Greens Member of the NSW Legislative Council, Mr David Shoebridge, has asked questions in Parliament about the proposed subdivision and development of land within the Mount Penang Parklands precinct at Kariong.
Mr Shoebridge asked the NSW Minister for Lands and Forestry, Mr Paul Toole, for clarification of the ownership of the 6,000 square metre-plus land proposed to be subdivided into eight Torrens Title lots and developed by Parklands Kariong Development Pty Ltd.
“Is the development site Crown Land?”, Mr Shoebridge asked.
If the land is not Crown Land, Mr Shoebridge has asked the Minister to clarify when it was sold and to whom.
He has also asked the Minister to report on the price paid if the land was sold by the Crown.
Mr Shoebridge also wants the Government to explain whether or not the dedication of the land has been lifted, and if so, when.
The questions were due to be answered by the Minister no later than December 21.
In a written statement, the Central Coast Regional Development Corporation (CCRDC) said: “The land is currently under contract to Parklands Kariong Development Pty Ltd, following exchange of contracts in September, 2016.”
CCRDC did not answer several other questions put to it by Coast Community News, including details about the purchase price.
A NSW Title Search shows the owner of the land to be CCRDC, with leases to an assortment of community organisations, not for profits and businesses.
Parklands Kariong Development Corporation Pty Ltd, according to information obtained from ASIC databases, was registered as a company in NSW in September, 2016, as an Australian Proprietary Company limited by shares.
At the time of registration, its principal place of business was the Platinum Building, suite 304, 4 Ilya Ave, Erina.
Current directors were listed as Mr Phillip Brand of Erina Heights, Mr Tim Gunasinghe of Erina, Mr Michael O’Brien of East Maitland and Mr John Stevens of Wamberal.
Mr David Brand of Erina Heights and Mr Phillip Brand of Erina Heights were listed as Company Secretaries.
Central Coast Council has confirmed that the December 2014 Draft Development Control Plan (DCP) covering the proposed subdivision and development at Mount Penang was finalised in December 2014 when it was incorporated into the Gosford DCP as Chapter 5.3.
Based on publicly available information, it is unclear how ownership of the Crown Land at Mount Penang was transferred to the Central Coast Regional Development Corporation.
According to the DCP that is still on the Council’s website as opposed to the draft on the CCRDC website, the development of new facilities for a Juvenile Justice Centre in 1999 meant that the NSW Cabinet agreed to the formation of a Development Corporation to manage the re-development of the excess land after the building of the Frank Baxter Juvenile Justice Centre.
In September, 1998 the NSW Government announced an initiative for Mount Penang to provide the Central Coast with long term economic benefits and jobs.
The key elements included the annual flora festival, sporting facilities, environmentally sustainable infrastructure and services, gardens, restaurants and high-tech internet and interactive computer facilities, permanent gardens, as well as community, cultural and accommodation facilities to attract tourism; and a commercial base for the development, securing private sector investment and sponsorship.
In November, 1998, the Festival Development Corporation was officially created by Government Gazette Notice to achieve the objectives of the Growth Centre’s Act as the majority of the Mount Penang site was, by then, classified as a growth centre.
In September, 2010, the Central Coast Regional Development Corporation (CCRDC) replaced the Festival Development Corporation and charged with the responsibility of promoting, coordinating, managing and securing the orderly economic development of Mount Penang.
The CCRDC was at that time subject to the control of the Minister for Planning and Infrastructure.
The original DCP 144 – Mount Penang Festival Development Site was incorporated into the Gosford DCP 2013.
It was adopted by Gosford City Council on March 7.
Work undertaken in 2000 to prepare the Mount Penang DCP represented the culmination of an urban design and planning process that involved stakeholder and public consultation, specialist studies, and market feasibilities, all of which has been revisited and updated as part of the final DCP dated December 2014.
The 2014 DCP took into account major changes to the site since 2000, “as well as reflecting a revision of the master plan for the Mount Penang site that has been informed by a servicing strategy, transport assessment and heritage review,” the Draft DCP said.
It was to be applied to all land zoned SP1 Special Activities – Mount Penang Parklands, as designated on the zoning maps in Gosford Local Environmental Plan 2014 and its status has now been clarified by Central Coast Council.