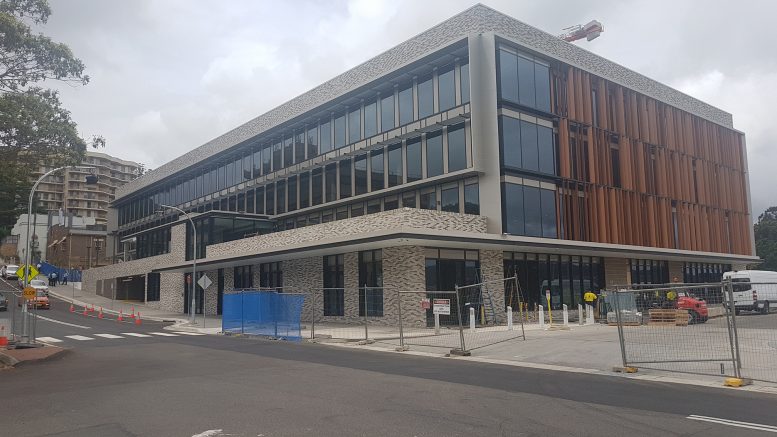 It has been a big year for the Gosford CBD and Central Coast Mayor, Jane Smith, has hinted that two major civic projects may take big steps forward in 2018.
The ATO building has officially opened, Froggys has nearly been demolished, there are multiple cranes in the air over Gosford, and it has been officially declared the Capital of the Central Coast by the NSW Government.
The two major community projects that residents have been campaigning for decades to achieve, a new regional library and a regional performing arts centre, are also closer to fruition, according to Mayor Smith.
Mayor Smith has confirmed the resolution made by Administrator, Mr Ian Reynolds, for the preferred site of the regional library to be in the Parkside Building in Donnison St.
“That was the resolution of the administrator, and that is what staff are currently working towards,” Mayor Smith said.
“Staff have been talking to Councillors about different options, but it is looking very promising and very exciting for that site.
“We want to open up that conversation with our community, and our proposals will be known early in the New Year,” she said.
When asked about the status of the monies gathered over many years in the form of a levy on rates specifically to fund a regional library, Mayor Smith said: “The money is still there, and certainly in the conversation that staff have been having with Councillors, that funding is part of the consideration.”
Mayor Smith said she had not heard any proposals that would see Regional Youth Support Services and other tenants currently occupying the Parkside building moved into the existing Gosford City Library on the other side of Donnison St.
“I haven’t seen any proposals or information about that at this stage,” she said.
Mayor Smith said plans for the library were “part of bigger conversation about the Gosford CBD.”
In her former role as CEO of the Community Environment Network, Mayor Smith had commented on the problems caused by land owners “land banking” in the Gosford CBD.
That practice includes buying properties at deflated prices, processing development applications, but never activating projects, resulting in the long-term stagnation of the CBD, while land owners simply wait until values inflate to on-sell their
vacant lots or decrepit buildings.
Coast Community News asked Mayor Smith what she intended to do with Council’s “bank” of CBD property, particularly the site of the former Commercial Hotel next to the Gosford Council Chamber in Mann St, which was acquired to be redeveloped as the regional library.
“It is my understanding the levy funds purchased The Broadwater Hotel site,” Mayor Smith said, undertaking to confirm that statement.
She also responded to questions about why $100,000 of capital was being spent on upgrades to the existing Gosford Library in 2017-18 if it was to be replaced
“I know there has been some recent work on the roof on the existing library, and in terms of the future of the building, I don’t believe there are any plans to get rid of the building,” she said.
The total capital allocated in the 2017-18 financial year for expenditure on “development of the regional library and commercial area” was $614,870.
A total of $1.5 million has been allocated in the current Council operational plan to “design” the regional performing arts centre to be located in Gosford.
“I would expect there will be a report come to Council in February that recommends a site,” Mayor Smith said.
“It is not confirmed that it is going to go on the Gosford Leagues Club Park, there is some consideration of other sites,” she said.
“We are certainly looking at and talking to the St Hilliers Group about the remainder of their land,” she said, referring to the remainder of vacant land at the former Gosford Public School site, which was originally promised to the community for use as an arts and recreation precinct.
“There has been no resolution but discussions are ongoing.
“Council is very conscious that we have commitments of state and federal funds towards that, so we are very keen to get it moving,” she said.
One of the major private developments that would shape the future of Gosford, the masterplan for the former Gosford Marketplace/Kibbleplex, that was purchased from the former Gosford Council by owners of the Imperial Centre, the Lederer Group, has not progressed, according to Mayor Smith.
“As far as I am aware there is no movement on those proposals at this point,” she said, adding that Lederer’s plans for the site were contingent on the Development Control Plan and Local Environmental Plans yet to be determined by Council for the CBD.