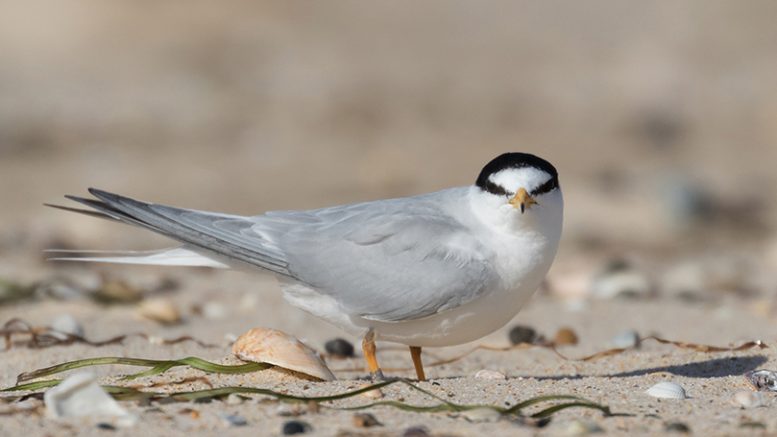 The Little Terns’ breeding ground at The Entrance has been fenced off as the rare species prepare to nest - Photo: Luke Ullrich

Central Coast Council has acted quickly to erect a fence to protect the nesting Little Terns at the north side of The Entrance, at Karagai Point.
“It is really pleasing that the Council has been so proactive,” said Mr Alan Morris, the Birdlife Australia Guardian for the Tuggerah Lakes’ Key Biodiversity area.
“Little Terns are a threatened species in NSW, nesting at only 12 sites on the NSW Coast,” Mr Morris said.
“Little Terns spend the Australian winter around Japan, but return every year to breed,” he said.
“About 400 pairs breed in NSW every year, but breeding success is extremely variable.
“This fence is really important, as the greatest threat to nesting success is predation by Silver Gulls, Australian Ravens, foxes and dogs.
“Human disturbance and dog walkers increase the risk of predation, because the parents are forced off the nest leaving eggs and young vulnerable.
“We urge people to respect the fence and keep dogs on leads in this area, to give the birds every opportunity to breed.
“At present there are only four pairs nesting.
“However, the chance of successful breeding, with only eight birds protecting the eggs and young, is not great.
“We are hopeful that more pairs will nest now that the fence has been set up.
“As many as 50 young have been raised at this site previously, but the normal number is in the 12 to 30 range, depending on conditions.
“The fence also protects the nesting Red-capped Plovers and other migratory shorebirds that like to roost in such protected areas.
“Local bird watchers will monitor the site on a regular basis,” Mr Morris said.