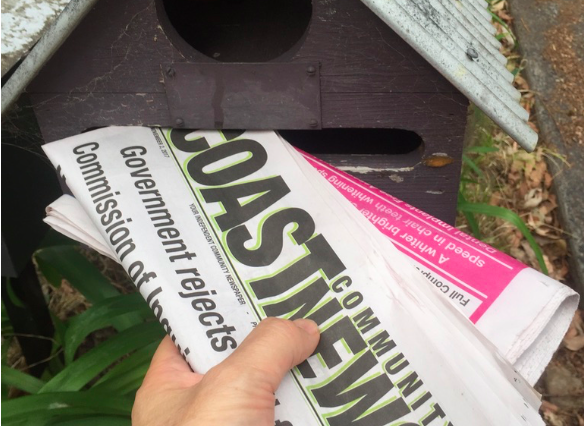 Following seven years of publishing a separate newspaper focusing on postcode areas 2250, 2251 and 2260, Central Coast Newspapers has decided to take Coast Community News to its next natural stage, and set up a home delivery arrangement.

To commence on November 16, the print run for Coast Community News will increase by 300 per cent to 44,000 copies, 42,000 of which will be hand delivered to letterboxes in 26 suburbs in those postcode areas. This will make it possible to have brochures and catalogues included within the newspaper to help pay for the increased print run and high distribution costs. Despite the 300 per cent increase in the print run and associated distribution costs, advertising rates will remain unchanged, making advertising better value than ever.

Additionally, advertisers that take advantage of the new insert offer will receive a free advertisement in the paper to support their insert. A full distribution will entitle the advertiser to a full colour, half page advertisement at no additional cost. A part distribution will entitle the relevant business to a proportionally reduced size advertisement. Papers will not be thrown into gutters or on driveways or lawns, but will be placed in letterboxes. There should be no wet weather issues unless letterboxes are not waterproof. As the newspaper is highly regarded, after having built a loyal following on the Coast over seven years, it should not be seen as junk mail and will therefore reach more homes than other catalogue distributions in those same areas.

Inserts will benefit from being included in such a highly respected publication. In another novel move, the cost of inserts will reduce for each other insert that is also included in the same distribution. This discount can be up to 33% off the single insert price. At least 40 walkers are being employed to complete the distribution, as well as drivers to deliver bulk quantities to selected locations. Well over 120,000 readers will now be better informed than ever by having this highly respected newspaper delivered to their home.

If you would like further information or wish to take advantage of this vast home delivery, feel free to contact Cec Bucello on 4325 7369 or email editorial@CentralCoastnews.net for further details.

Please note – this does not effect the Peninsula News or Wyong Chronicle at this stage.

Major changes to your newspaper