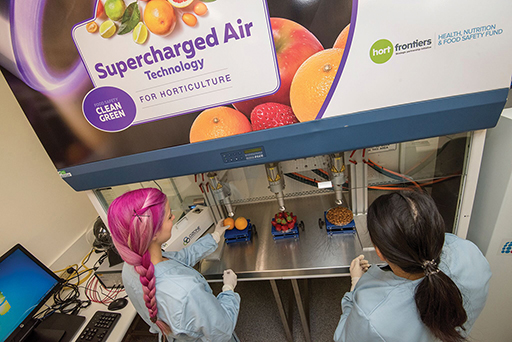 A state of the art produce sanitisation machine has arrived at Ourimbah Campus, from Germany, as Australia takes its food safety technology to the next level.
Dubbed ‘The Food Safety Supercharger’, the custom-made 250-kilogram test unit creates a stream of ‘supercharged air’ by applying an electric current to normal air.
Using this disruptive technology, it has the capacity to kill microbial pathogens on the surface of fresh produce and nuts without leaving any chemical residues.
Housed at the NSW Department of Primary Industries’ laboratory at Ourimbah Campus, this world-first machine aims to eliminate microbial contaminants such as Salmonella, Listeria and E.coli, which cause foodborne illness outbreaks.
Other spoilage-causing moulds can also be suppressed, offering a longer shelf-life and reduced food waste.
Hort Innovation fund manager, Mr Tim Archibald, said the technology, which is part of a $5 million jointly-funded project with the NSW Department of Primary Industries, has never been commercially used on food.
“The Food Safety Supercharger is here, and Australia is on track to introduce some of the most sophisticated sanitation technology in the world,” Mr Archibald said.
“While there are good post-harvest practices already in place in Australia, when isolated contamination incidents occur, farmers are devastated.
“This supercharged air technology has the exciting potential to limit product recalls, minimise trade disruptions and ensure that consumers are confident about the produce that they are buying.
It also offers an environmentally-friendly alternative to traditional food sanitisers,” he added.
Lead researcher, Dr Sukhvinder Pal Singh, explained that supercharged air is plasma, which is the fourth state of matter after solid, liquid and gas.
“Natural plasma in the universe, such as the sun’s surface, has a temperature of thousands of degrees Celsius, while human-made, non-thermal plasma is only 30 to 40 degrees.
“That is why the technology can also be referred to as ‘cold plasma’,” he said.
Dr Singh presented the bold idea of applying cold plasma technology to fresh produce and nuts to Hort Innovation about a year ago.
“It was a transformative idea that presented a high reward for the horticulture industry if it worked,” he said.
“Non-food sectors such as automotive, aerospace, textile, polymer, electronics and biomedical were already using the technology, particularly overseas, but it has never been applied to fresh produce.
“Once support was secured from Hort Innovation, which encourages disruptive technology, our team was able to start the research with the first-generation plasma unit.
“We then engaged a world-leading machine manufacturer in Germany to create a custom unit,” Dr Singh explained.
Dr Singh said that through their early testing, his team have determined that killing of bacteria and moulds is possible in a short treatment time, but there is still a lot of research to come.
He said now that the latest generation of the machine is in the lab, the efficiency at which researchers can decontaminate produce is significantly higher than with their previous test unit, which was one-fifth the size.
He said after determining which fruit, vegetables and nuts are responsive to the treatment, the research team needs to ensure the killing of microbial pathogens does not compromise the quality and nutritional value of food.
“Ultimately, we would like to see this technology work and provide a pathway to commercialisation and for growers and packers to adopt it.
“Time will tell, but the early signs of this research are certainly promising,” Dr Singh concluded.
The research is due for completion in 2021.

Gosford, News, On the Beat

Gosford Police Station to be upgraded