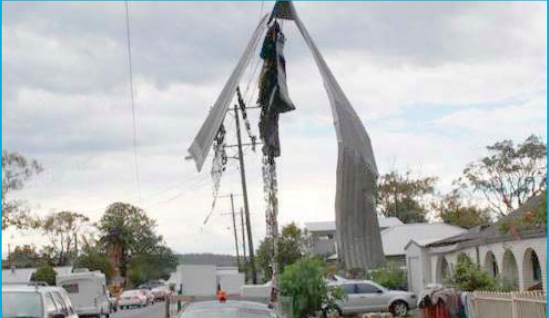 The intense storm cell expected to break over the Central Coast on November 6 has come to pass, with the northern end of the Coast the most effected.
More than 1,000 homes and businesses in parts of Toukley, Noraville and Canton Beach had their power cut.
Downed power lines and trees were to blame and caused heavy congestion around Main Rd and Cross St, near Toukley Public School.
The Bureau of Meteorology issued a warning for severe thunderstorms, hail and damaging winds just after 1:00pm on November 6, with the storm battering across the Coast in an easterly direction, just after 2:00pm.
Initial reports on the storm suggest that Toukley may be one of the worst effected areas, with online reports and videos of the aftermath showing trees down across roads, intense winds and large hailstones.
Motorists also reported being trapped on Main Rd after the initial storm surge brought down trees and power lines, creating a hazardous zone that brought traffic to a complete standstill.
Local artist, Ms Kelly-Anne Love, was one of the motorists trapped.
“Far out hail blizzard and now caught in fallen trees and a web of live wires both ends, outside Toukley Public,” Ms Love wrote on her Facebook page.
“Safe and sound now, police, ambos and fireys were into it and got us out of the dangerous trap,” she wrote.
Local storm chaser, Mr Scott Corcoran, braved the wild weather to capture the carnage.
Mr Corcoran documented the aftermath, with roofs off houses, trees uprooted and debris littering the streets.
Central Coast Council also issued a public notice through their Facebook page listing areas most effected by the storm.
“The storm has caused some major damage on the Coast with a number of trees and power lines down”, the Council statement said.
“Crews are in place or on the way but are struggling to get through in some places.
“There is a tree across the road on Bumble Hill Rd, Yarramalong, and one across the road at Dickson Rd in Jilliby.
“Trees are down in Noraville and Toukley, mainly in Evans Rd, with power lines down in other streets.
“Please be patient and take extra care on our roads as our crews, SES and Ausgrid get to work,” Council wrote.
The SES was unavailable to discuss the storm clean up at the time of publication.
Toukley Public School students were affected, with parents needing to collect students from Kooloora Rd as emergency services worked to clear debris at the front of the school.
Businesses in the area also felt the brunt of the storm, with Steer Rite Motors on Main Rd losing a wall and its ceiling on the verge of collapse.
Mr Peter Yates, from Steer Rite, said the devastating storm swept through in a matter of minutes.
“The wind swept through the roller door and just blew the back wall out.
“Luckily our hoist was up, and now, it’s holding up our ceiling.
“Our back neighbours now have half a workshop on their property.
“The main road’s a mess, the town’s a mess, there’s quite the clean up ahead,” Mr Yates said.
Authorities urged all non-residents to avoid the area as Main Rd was blocked off by fallen trees and traffic remained heavily congested for some time, building up as far back as the Wyong Leagues’ roundabout.