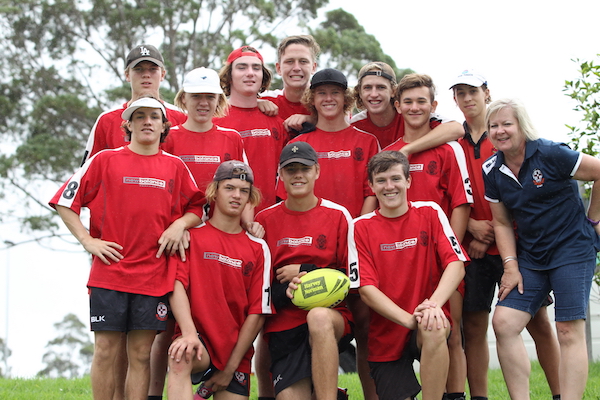 St Edward’s College Principal, Mr Mark Bonnici, has recapped the College’s Year 9-10 Touch Football Team’s experience at the National Youth Schools Championships on the Sunshine Coast, Qld.
St Edward’s qualified for the national championships automatically after making it to the semi-finals of the NSW Championships.
“After the two-day road trip and a warm-up game against Tasmania, the team was ready for some tough competition,” Mr Bonnici said.
“The team played pool games on the Wednesday against Hunter Sports High (drawing 9-9), Cavendish Road SHS (winning 7-6) and Narrabeen Sports High (winning 5-4).
“The boys gained a lot of confidence from these results and started to believe that they might give the competition a real go.
“On the Thursday after a bye in the morning, they played their final pool game against Helensvale SHS (winning 4-2).
“The results meant they won their pool and played a Quarter Final against the fourth placed team from Pool B, Cleveland District SHS.
“The team had a real confidence about them, and after a nervous start, where Cleveland tried to unsettle the boys, they continued to play up-tempo and ran away with the game winning 8-1,” Mr Bonnici continued.
“Into Day 3 (Finals Day) and a nervous energy gripped the boys.
“We had come all this way to play local team Narara Valley High, who has been our archrival over the last two years.
“We started well with Josh Woutersz taking an intercept and running the length of the field to score the opening try.
“From there the score line went tit-for-tat with neither team able to break free.
“In a tense last couple of minutes, we scored to lead by one and Narara now had one final set on our line.
“Some slick play saw them score and tie the game.
“We now headed into a drop off situation and started extra time with five on five.
“Both teams had chances to score but didn’t and time ran out.
“Now down to four on four players.
“Sandon Smith got Riley Stevenson into space and he made a great break with desperation defence from Narara just stopping him well into their half.
“The damage however had been done and Levi Kasun capitalised on the opportunity to push the ball to Riley who scored in the corner to win the game 7-6,” Mr Bonnici said.
“Although tired, the boys were very excited to make it to the final.
“The opportunity to run out of the stadium tunnel, sing the National Anthem and play in front of a Finals Day crowd had them ready to go.
“Again we were playing a team not far from us in Warners Bay High.
“The game went very much like the previous games with not much in it.
“Warners Bay however, were able to score on the stroke of half time to lead 5-3.
“The team was unable to rally and Warners Bay went on to win.”