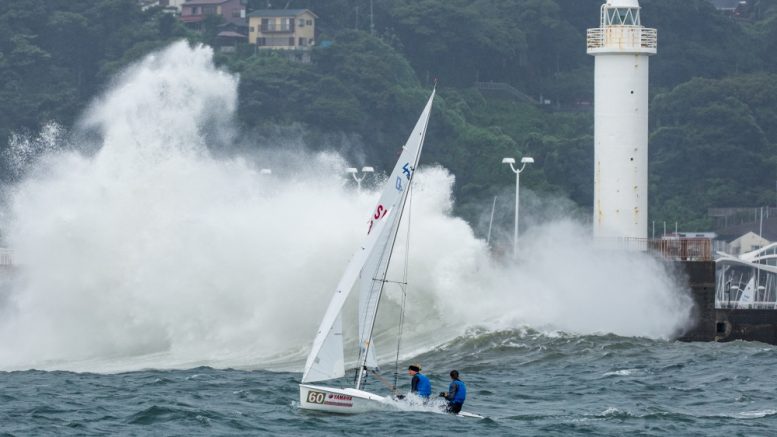 Gosford Sailing Club 470 skipper, Sophie McIntosh, and her crew, Orla Mulholland-Patterson, acquitted themselves well at their first international regatta in the class at Enoshima, Japan.
The 2020 Olympics sailing site provided challenging conditions, with a typhoon delivering several days with wind strengths of 20-30 knots, and a high military presence in the skies above, due to the North Korean missile incident adding to the drama.
As a warmup to the 470 Junior World Championships, the girls first competed in the week-long Japan Nationals, where they experienced light, shifty conditions.
The Nationals were an all-ages mixed fleet, which attracted some of the top sailors in the world, including Australian Olympians and silver medalists, Matt Belcher, and, Will Ryan, who finished 4th overall.
McIntosh and Mulholland-Patterson finished 54th out of 113, and 14th among female teams at the Japan nationals.
In the main event, the week-long 470 Junior World Championships, both the wind and waves were up with an approaching typhoon.
The competition was restricted to sailors aged 23 and under, and the men and women sailed in separate fleets.
The girls started off well with a seventh in their first race in the 25-strong women’s fleet.
They were unable to compete in one race later in the regatta due to safety concerns when 30 knots of wind hit the boats as the race committee prepared to start a race.
They were determined to come back strongly the next day, with a fourth placing in 20 knots the highlight of their campaign.
After 10 races, the top 10 boats were separated from the rest for the medal race, where Spain’s Silvia Mas Depares and Paula Barcelo Martin successfully defended their title, with Western Australians Nia Jerwood and Monique DeVries finishing runners-up.
McIntosh and Mulholland-Patterson were awarded a prize for second place in the under-20s division and finished 16th overall, the second best placed Australian team out of four teams involved.
McIntosh said on Facebook that the under-20s achievement was “awesome” and it was “great to keep building both knowledge and experience in the class”.
“Still lots to improve on, but off to a good start … for our first international event in the 470, we had a blast and are really happy with our progress.”
McIntosh and Mulholland-Patterson are part of the Australian Sailing Squad in the 470 class and will be competing together in Perth in both the 420 Worlds and the 470 Nationals in December.