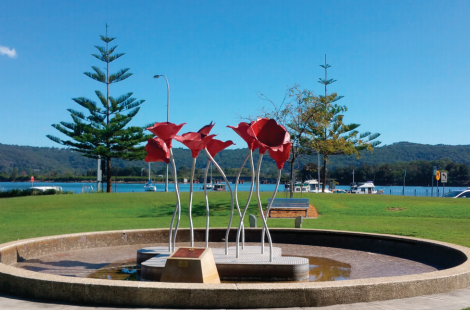 The revitalisation of Gosford’s CBD and waterfront will be guided by the NSW Government Architect to deliver improved infrastructure and fast-track housing supply as part of the Central Coast Regional Plan.
NSW Minister for Planning and Housing, Mr Anthony Roberts, and Parliamentary Secretary for the Central Coast, Mr Scot MacDonald, confirmed the Government Architect was commissioned to develop an implementation framework for the Gosford revitalisation.
“The work of the Government Architect, with the support of Central Coast Coordinator General, Ms Lee Shearer, will be a major milestone in the renewal and redevelopment of the Gosford CBD and waterfront,” Mr Roberts said.
“The NSW Government has already demonstrated its commitment to the area through investment in the Gosford Hospital re-development and the new office building under construction in Mann St,” he said.
“This work aims to implement existing plans to create a dynamic, vibrant and lively Gosford centre that links seamlessly to a revamped waterfront that will be a wonderful place for both locals and visitors to enjoy.”
The Government Architect will appoint a multi-disciplinary design team and, after a period of consultation and workshops with key stakeholders, the team will present a final report to Ms Shearer in the new year.
“The Central Coast is a beautiful area with enormous potential and our commitment is to transform Gosford into the dynamic hub the region deserves,” Mr Roberts said.
Mr MacDonald added: “It is fantastic to finally see progress on implementing a cohesive plan to re-develop Gosford’s city centre.”
“We now have a collaborative and coordinated framework to deliver major projects such as this.
“All the ground work has been laid and it is now time for action.”
Ms Shearer said the revitalisation would start at Etna St and go south to the waterfront.
“The Government Architect is due to present a final report detailing the work needed to deliver a revived Gosford CBD and waterfront for Ministerial consideration by mid-2018,” Ms Shearer said.
President of the Gosford Waterfront Alliance (GWA), Mr Kevin Armstrong, said GWA had been surprised by the NSW Government announcement “coming, as it did, within days of the election of our new Central Coast Council.
“GWA finds it unusual that the Government Architect would be engaged to develop an implementation framework,” Mr Armstrong said.
“We note the Minister said the Government Architect’s work would aim to ‘implement existing plans to create a dynamic, vibrant and lively Gosford centre’ but which existing plans?” he said.
“The only formal existing plan GWA is aware of is the Gosford City Master Plan, Our City Our Destiny, which was totally ignored by the current Government when it used a 24-hour State Environment Planning Policy to rezone waterfront land and then sold it off for office development.
“Ignoring the Our City Our Destiny Master Plan broke a long-standing commitment to our Central Coast Community for an iconic Performing Arts Centre on the former school site on Gosford waterfront.
“GWA welcomes the promise of a period of consultation and workshops before the team presents a report to Ms Shearer.
“Given this timeline, one can only assume the consultation and workshops will commence within the next few days, but we have heard nothing,” Mr Armstrong said.
According to Ms Shearer: “We are building on the extensive consultation with key stakeholders and the community that occurred from 2010 for the Central Coast Regional Plan.
“We are now at the next implementation stage to bring the plan to life for a revitalised Gosford CBD,” she said.
“The five precincts are already planned and in place: the Hospital Precinct; the Railway Precinct; the City Core; the Arts and Entertainment Precinct; and the Waterfront.
“We are consulting with the various stakeholders on a Delivery Coordination and Monitoring Committee, comprising representatives from the Department of Premier and Cabinet, Central Coast Council, Transport NSW, Property NSW and the Office of Environment and Heritage.
“This committee meets monthly for a progress report on where the various implementation programs are at and to formulate next steps to keep the wheels in motion on the delivery of the Central Coast Regional Plan,” she said.
Ms Shearer said the status of the Central Coast Regional Development Corporation’s authority in relation to the Gosford CBD and waterfront was still being considered.
Likewise, she said she would release more information on whether any areas or precincts were State Significant Sites.
Ms Shearer said the fact that the waterfront from the railway line to Point Frederick was Crown Land for public recreation was still being considered along with the future of Dane Drive.
As for the role of the newly-elected Central Coast Council, Ms Shearer said: “The Central Coast Council is one of the key stakeholders that are regularly consulted with as part of the Delivery Coordination and Monitoring Committee.”
Member for Gosford, Ms Liesl Tesch, said she was confident the Government Architect would include previous extensive community consultations in any new framework.
“Gosford doesn’t have time to go back to scratch and come up with yet another plan we can sit on for a year or two,” Ms Tesch said.
“We have already been on hold for 18 months because of the Council amalgamation,” she said.
“I expect key stakeholders will have input before the new framework goes to Ms Shearer in the new year,” she said.
She said she believed that framework would stay true to the concept of precincts that came out of the previous community consultation and Our City Our Destiny process.