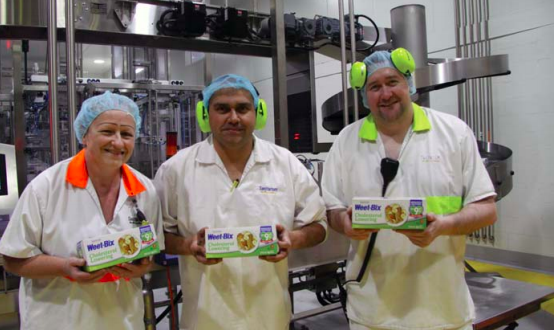 Berkeley Vale’s own Sanitarium Health and Wellbeing has unveiled an Australian-first extension to its iconic Weet-Bix, aimed at supporting the one in three Australian adults needing to manage their cholesterol levels for their heart health.

Labelled Weet-Bix Cholesterol Lowering, it will become the first cereal product in the country to harness plant sterols to effectively reduce cholesterol levels over four weeks with just two biscuits (one serve) consumed daily. Launched in major supermarkets in Australia in September, the breakfast innovation contains plant sterols, which are clinically proven to reduce LDL (or bad) cholesterol by up to 9 per cent in four weeks.

The efficacy of WeetBix Cholesterol Lowering was verified via a clinical trial involving Australian adults with high cholesterol, conducted in 2016 by a team of researchers at the University of South Australia. “Weet-Bix has long been a nutritious breakfast staple for millions of Aussies every day, and we are now taking it to another level. This new product makes it easier than ever before for Australians to take charge of their heart health,” said Mr Kevin Jackson, CEO of Sanitarium Health and Wellbeing. “We’re thrilled to be the first breakfast cereal in the country that can make such a direct and positive impact and help Aussies needing to manage their cholesterol in a healthy and enjoyable way,” he added. The launch comes at a time when worrying statistics demonstrate Australian’s cholesterol complacency.

In a nationwide poll of 1,000 Australians, commissioned by Sanitarium and conducted by Galaxy Research, two-thirds (64 per cent) of respondents revealed that they do not have their cholesterol tested once every two years, as commonly advised by health practitioners. Almost half (43 per cent) of these respondents are aged 45 and above, who fall within the high-risk group. Cholesterol testing also failed to get on the radar of nearly nine in 10 (86 per cent) aged 18-44.

The Heart Foundation, which has partnered with Sanitarium in their collective mission to help improve Australians’ heart health, recommends that all adults aged 18 and over should get themselves checked to get ahead of any longer term health implications. “High cholesterol is one of the leading risk factors for heart disease with an estimated 46 per cent of heart disease deaths in Australia being attributable to high cholesterol. “As such, lowering your cholesterol levels can go a long way towards improving your future heart health,” said Professor John Kelly, CEO National of the Heart Foundation.