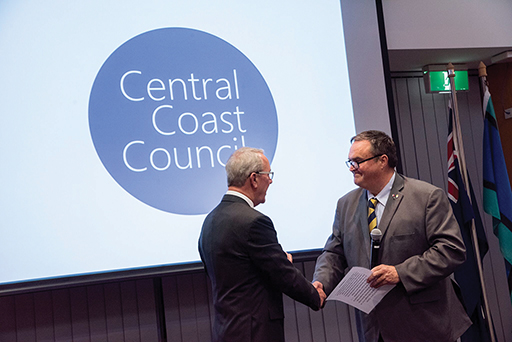 Clr Chris Holstein the only Gosford West Councillor to be given a committee post. with CEO Mr Brian Bell Photo: Noel Fisher

The Peninsula is unrepresented on three key committees appointed by the new Central Coast Council.
No positions on the Joint Regional Planning Panel, the Grants and Sponsorship Review Panel or the Audit, Risk and Improvement Committee were filled by Gosford West councillors, who represent the Peninsula.
The committees were appointed on Monday, October 9, at the Wyong Chamber.
Cr Kyle MacGregor and Cr Chris Burke, both representing the Wyong ward, were chosen to be the Council’s representatives on the Joint Regional Planning Panel.
Mayor Cr Jane Smith and Cr Jeff Sundstrom both from the Gosford East ward were chosen as alternate delegates for the panel.
The appointments were effective immediately and for the three-year period.
“This panel will be responsible for helping to shape how our region grows and develops now and in the future and we need to have a seat at that table,” Cr Smith said.
“The appointments were a unanimous decision of Council so our representatives can be confident they have the full support of Council to carry out their duties,” she said.
The panel provides independent, merit-based decision-making and advice to the NSW Minister for Planning on regionally significant development proposals, with a value over $20 million.
The panel is made up of five members, three independent experts appointed by the Minister and two recommended by Council.
Councillors also voted on the appointment of Council representatives to the key positions in the Grants and Sponsorship Review Panel and the Audit, Risk and Improvement Committee.
The Grants and Sponsorship Review Panel is responsible for reviewing all staff recommendations for eligible applications, over $5000, received within the Grants and Sponsorship Program.
The Program funds more than $1.4 million in community events and programs across five areas including community partnership, community development, place activation, community support, heritage and sponsorship.
Cr Smith will chair the panel with Cr Lisa Matthews (The Entrance ward) and Cr Jilly Pilon (The Entrance ward) as council delegates.
Cr Chris Holstein’s appointment as an alternate delegate on the review panel made him the only Gosford West Councillor chosen for any of the representative roles determined at the first meeting.
Cr Louise Greenaway (Wyong ward) was chosen as the second alternate delegate.
Council group leader Ms Julie Vaughan was also appointed to the panel.
The Audit, Risk and Improvement Committee has oversight of all Council’s operations, including compliance, risk management, fraud control, financial management and governance.
The committee has three independent members on it, being Mr Colin Gellatly, Mr John Gordon and Mr Carl Millington.
Cr Doug Vincent (Budgewoi) and Cr Louise Greenaway (Wyong) were appointed as the representatives on the committee with Cr Lisa Matthews and Cr Sundstrom as alternates.