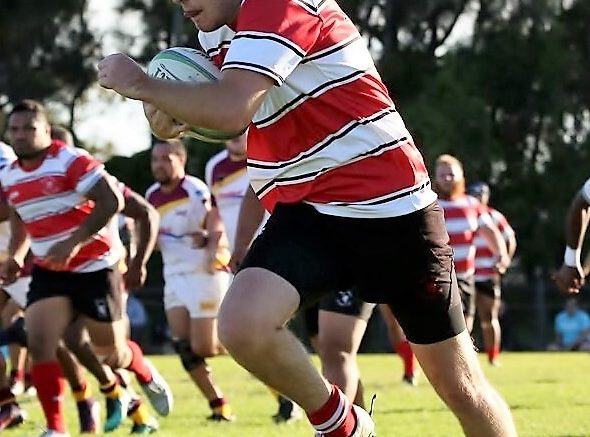 Woy Woy Rugby’s successful performances from 2014 through 2016 were not matched in 2017, which was disappointing but in review there was much to take out of their efforts, according to club publicity officer Peter Fenton.
The firsts, premiers in 2014, runners- up in 2015 and semi- finalists in 2016, missed the play-offs by just one game.
The minor grades also missed out on the play-offs offs but there were several newcomers who had very good seasons as shown in the awards presented at the season’s end.
First grade’s Best and Fairest Award went to young prop, Matt Graham, who was a member of Woy Woy’s 2016 second grade premiers.
Rugged inside centre Fokolulu Taumolol was best first grade’s back and outside centre, Blake Arahill, won the trophy for top try scorer.
Like Matt Graham he was a member of last year’s second grade premiers.
Only 21, Arahill has a promising career ahead.
“He has pace and the ability to beat tackles and with more experience and natural improvement is a potential representative player,” said Mr Fenton.
Back-rower, Alifeleti Atiola, in his fourth season with Woy Woy was judged Players’ Player.
Flanker Nick Rauschenback won Best and Fairest in a second grade side.
Eighteen-year-old Zac Doake-Stride was judged best back, having performed well in several appearances with the firsts.
Rookie of the year was Adam McVean.
Playing his first season with Woy Woy Rugby, McVean showed great aptitude and is a potential first grade player.
The top point scorer trophy was won by Alex Moore who plays fullback or wing and whose general play and goal kicking was top class.
The Col Gooley award, given for outstanding service throughout the year, not restricted to players, was most deservedly won by club and first grade captain Kane Burns.
Burns, a natural back-rower, is playing his best football in the second row and works tirelessly off the field to promote the club.
A most pleasing aspect of the Awards function was that Woy Woy was presented with a shield, presented each year by the Central Coast Referees Association.
The shield is given to the club whose attitude and spirit most exemplified sportsmanship and an effort to improve the image of the game.
A full list of award winners is on the club website.