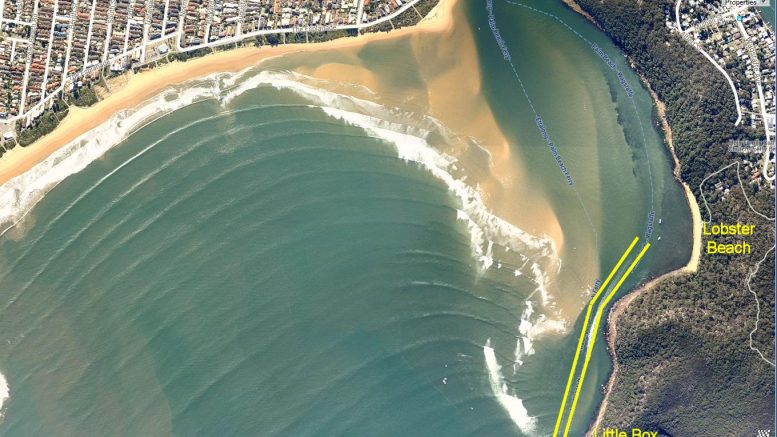 Lobster Beach in Bouddi National Park has a “renewed sand coverage”, despite emergency dredging conducted in the nearby navigational channel, according to the local community association.
Wagstaffe-Killcare Community Association secretary Mr Ian Bull said he had walked down to Lobster Beach recently to find the western end of the beach, which had been significantly depleted months ago, was looking “beautiful”.
He said he did not believe the renewed sand coverage at Lobster Beach was a by-product of the dredging process and probably related more to the natural movement of sand in the estuary but it was good news for the community.
Mr Bull had taken a series of photographs from the top of the escarpment overlooking Lobster Beach during the latest two-week period of emergency dredging.
“No doubt many are interested in the disruption caused to the Palm Beach Ferry service by the condition of the Little Box Head to Lobster Beach channel, commonly referred to in the press as the Ettalong Channel,” Mr Bull said.
He said his photographs showed the dredging of sand from the protected end of the channel off Lobster Beach and depositing it 60 metres away, creating a new sand shoal.
“The dangerous shallow entrance to the channel, over 500 metres south-south-west at Little Box Head, exposed to south-east seas, has not been dredged,” he said.
“It’s a cheap job that they are doing, basically pumping out sand along the restricted narrow part of the channel that is not necessarily the shallowest part.
“They have started at the corner of the sand shoal on the west end of Lobster Beach and worked to widen the channel.
“From my perspective, they are simply widening it and not making it deeper.”
Mr Bull said his series of photographs showed the newly-created sand shoal had grown throughout the latest fortnight of dredging, but he did not believe it posed a new navigational risk.
“Once you go west from the channel towards Ettalong and Umina, there are many other shoals,” he said.
According to Mr Bull, the emergency dredging has stopped between 300 and 400 metres short of Little Box Head.
“That is the opening of the channel and there has been nothing done out there.
“I would like to know if that is the location where the ferry ran aground.”
Mr Bull said the community association supported the ongoing dredging of the Little Box Head channel and the continuation of the ferry service.
“We also believe this is ultimately a State Government responsibility and we are preparing some correspondence about that,” he said.

Dredging fund called for by Council

Search ALL ‘dredging’ related articles in our archives here.