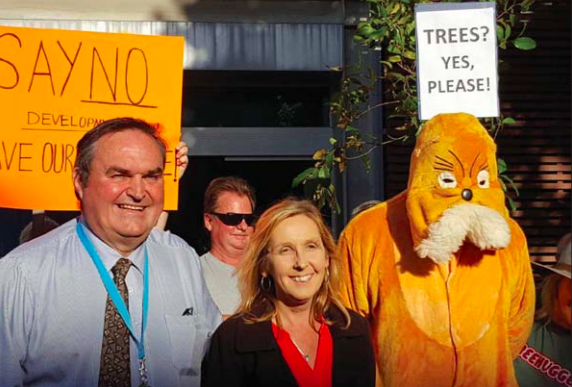 The mayor and deputy mayor have met with members from the Council for the Trees outside the Gosford Chamber of Central Coast Council on Monday, October 23.
The Council for the Trees brought together environmental campaigns from across the region to remind the recently-elected councillors that environmental protection was high on the community’s list of priorities.
One of the rally’s organisers, Ms Sue Chidgey, who headed up the successful Save Gosford’s Reserves campaign in 2016, said at least eight different groups were represented.
Grow Urban Shade Trees was one of the Peninsula groups that was represented along with local Greens Central Coast representative, Ms Kate da Costa, of Umina.
Mayor Cr Jane Smith and deputy mayor Cr Chris Holstein both spoke with event organisers.
“It was heartening seeing the different groups talk to each other and a sense of solidarity was evident,” Ms Chidgey said.