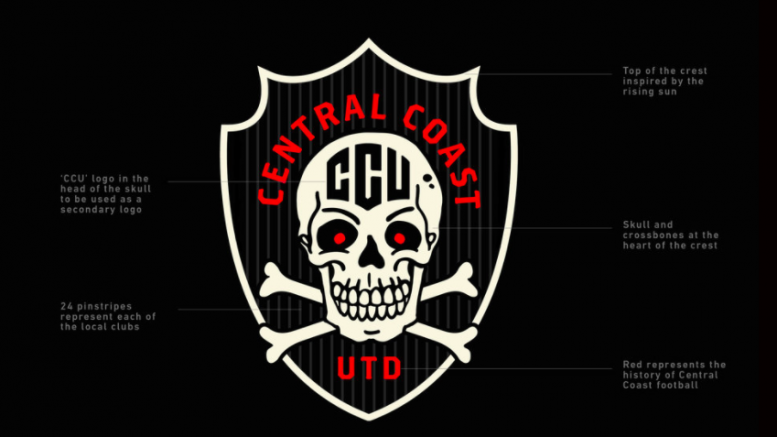 Central Coast United have unveiled a new club logo today to be used in the inaugural State League campaign in 2018, along with the Association Youth League and local SAP programs.

The Logo is the latest in a series of announcements that demonstrate the new era of Central Coast Football and the direction the club is taking ahead of its first season in FNSW Competitions. ‘I am excited by the release of the new logo and how it represents the clubs development’, said CCUTD Technical Director Dean Heffernan.

‘This logo is grounded in our beginnings with the CCFA program, while adding the history of Central Coast Football and the 24 member clubs. This identity will help in building something special with the local football community.’ The skull and crossbones are a prominent design feature and evolution of CCF’s previous CCFA program, instilling a sense of culture and identity to the club’s ambitions.

Further design cues include the 24 pinstripes to represent each of the local clubs, and the top of the crest inspired by the rising sun – a nod to the new beginnings of Central Coast United. Red has been used as a nod back to Central Coast Representative history – with teams playing in predominantly red strips from 1963 to 1999. The logo continues the announcements surrounding the club’s identity and culture moving forwards, and has been created over the past month as part of a collaborative effort between CCF and Matthew Wolff Design, who’s resume includes identity designs for Los Angeles FC, New York City FC and Nike Football. Further Player signings and the Clubs playing strip will be unveiled later this summer, with UMBRO Australia confirmed as the kit supplier. With Leadership locked in on the pitch, and on the sideline, the Club is poised for success in the coming months.