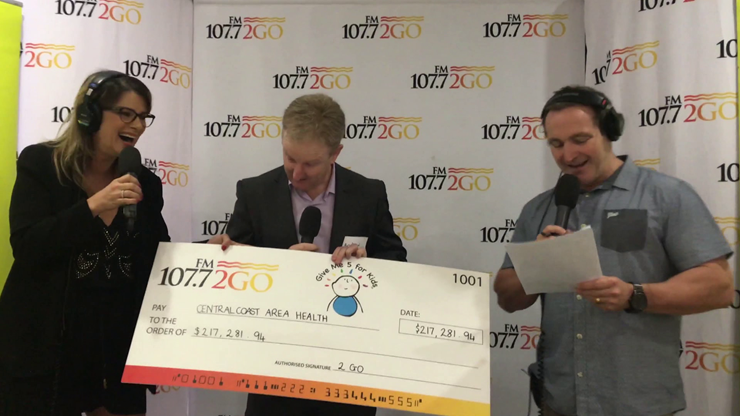 Sarah King, co-founder of Give Me 5 for Kids hands over the 2017 cheque to Central Coast Area Health

Woolworths Erina and Tuggerah customers have raised over $63,000 for local charity Give Me 5 For Kids, smashing the fundraising goal by more than double.

All proceeds will go towards much needed resources and equipment for the children’s wards at Wyong and Gosford Hospital, as well as a percentage going towards Camp Quality on the Central Coast, which supports children living with cancer and their families. Collaborating with 2GO and its Breakfast Show Announcer, Ms Sarah King, who started the charity in 1994, the Woolworths teams rallied together to organise large events, setting up stalls, a barbecue, face painting, chocolate wheels and more at Woolworths Bateau Bay and Woolworths Tuggerah.

Woolworths Central Coast Group Manager, Mr Bert Vandenberg, said; “I was overwhelmed by the generosity of the Central Coast community and the way the locals got behind the cause. “Seniors, families and young children were a part of the events we hosted and did what they could to show their support. “It was heart-warming to see the local community respond in such a positive way to our fundraising efforts. “We couldn’t have smashed our fundraising goal without their generosity and are very grateful for the support. “I’m so proud of what our teams have achieved to make a difference in our local community,” he concluded. Give Me 5 For Kids founder, Sarah King, said; “We were just so overjoyed with Woolworths’ involvement in Give Me 5. “To have such support for our beautiful community minded charity, in such an enormous way, has been quite overwhelming,” Ms King added.

More stories: Give Me 5 for kids launch event