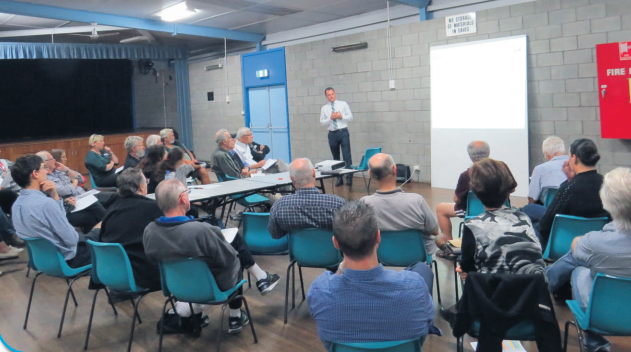 Residents who live near the Eraring and Vales Point power stations

A heated community meeting of residents who live near the Eraring and Vales Point power stations has called for the NSW Government to get serious about monitoring air pollution from coal- fired power stations.

Residents at the meeting in Wyee were angry that there was only one EPA air pollution monitoring station on the Central Coast and it is located far from the power stations. The meeting called on the government to dramatically increase monitoring. Community members also expressed concern that the power stations would continue to pose a public health threat long after their scheduled closure in the next decade or so.

They called on NSW Environment Minister, Ms Gabrielle Upton, to make sure power station owners were held responsible for the costs of decommissioning, rehabilitating and managing their toxic legacy. “We urge the NSW Government to hold bonds to protect community health during the decommissioning and rehabilitation of the state’s ageing fl eet of coal-fi red power stations,” said Dr James Whelan, researcher with Environmental Justice Australia (EJA), the organisation that hosted the community meeting. Dr Whelan and representatives of the Nature Conservation Council of NSW, and Doctors for the Environment Australia met with Ms Upton in early April to seek the minister’s assurance that adequate bonds were held by the NSW Government.

“Since New Year, EJA has held community workshops near most of Australia’s largest coal- fi red power stations and we have not yet met anyone who believes state governments or the power station operators are doing enough to control toxic pollution,” Dr Whelan said.

“People living near coal-fired power stations support much stricter controls, including continuous stack monitoring, emission limits for toxic pollutants and fees that motivate companies to reduce emissions,” he said. Eraring, the state’s largest generator (2,880 megawatt capacity), is a 34-year-old coal- fi red power plant that is scheduled for closure in 2030. The owners of the recently-closed Hazelwood power station estimated the costs of decommissioning , site remediation and rehabilitation at $75 million in 2015, but the cost blew out by 2017 to $750 million, according to Dr Whelan. Speakers at the Wyee community workshop included Dr Ben Ewald (Doctors for the Environment), Mike Campbell OAM (Community Environment Network) and environmental lawyer Bronya Lipski (EJA).