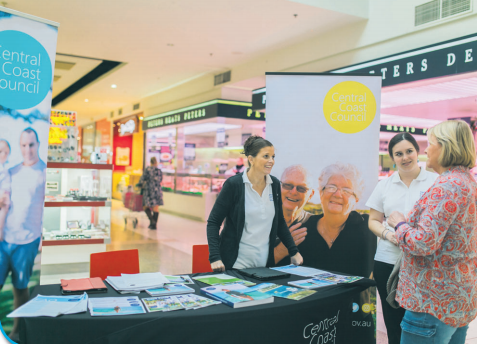 Residents young and old from every one of the Central Coast’s diverse and interconnected communities, are being asked to contribute to the first ever combined Central Coast Council 10-year strategic plan.

Ms Julie Vaughan, Council’s Group Leader of Connected Communities, said that the process of putting the plan together was in the fi rst of its critical phases. “Between April and June, we will be using a range of avenues to gather data from the community about what it wants to see in the strategic plan,” Ms Vaughan said. “We are saying that here is your opportunity to shape the future of where you live,” Ms Vaughan said. “Do you want to help shape the future of the Central Coast, share your thoughts to help us create a shared vision and direction for the whole Central Coast?

“We need to get this right, we have got one opportunity. “Part of the challenge is making sure we get broad representation. “We need to plan as a region, but we also know that what is important to the community is their own local community and their own back yard. “We understand the plan needs to consider what is great about Kulnura and about Terrigal, but also what those residents imagine for the broader Central Coast.

“Both are important, and our sense of local is enormous on the Central Coast,” she said. She said the Council team working on gathering data from the community was using paper and online surveys, engaging with the public at “pop-up” stands in shopping and community centres, and through events such as the recent Harmony Day gathering at The Entrance. “We will be going to senior citizen centres, schools, and railway stations to talk with commuters, because we understand that tens of thousands of people leave the Coast every day to work,” Ms Vaughan said. “We will be consulting with hard to reach groups such as those with a disability or from non-English speaking backgrounds. “

We will be linking with the organisations and groups who support those people to fi nd out how best to reach target groups.” Council’s own staff, 94 per cent of whom are also local residents, will also be asked for their opinions and views. In terms of exactly what the Council wants to know from members of the community during this initial data gathering exercise, Ms Vaughan said that synthesised down into answers to four questions. “We want people to challenge themselves. “Council is part of the community too and we are not the solution to every problem.”

She said if the information gathered from the community uncovered that its priorities for the Central Coast over the next 10 years fell in areas that were outside the control of the council, it was prepared to “have a role in advocacy on behalf of what the region’s priorities are”. Once the community has had the opportunity to provide its thoughts on what it loves about the Central Coast and where it would like to see the region headed during the next decade, the next phase of putting the strategic plan together will be collating and analysing the feedback provided. “Whether around infrastructure or transport, we know there will be some common themes.

“We also know people are pretty excited about what the future holds now that we have one combined council.” From August to December another round of more targeted research will take place, which will include the views of the newly-elected Central Coast Councillors following the fi rst local government election in September since the amalgamation of the former Wyong Council with Gosford Council. It may also include focus groups with residents and will tap into the views of other stakeholders such as government agencies, interest groups and the business community.

Then between December and February, all the analysis will be put together in a format that can make sense to the community and to the newly-elected Central Coast Council. Ms Vaughan said: “We don’t want to write a 180- page document and then find people don’t connect with it. “We are using new methods of engaging and we want to try new methods of presenting information so we don’t know what the plan will look like yet.” During March and April 2018, the new 10-year plan will be placed on public exhibition.

“This will be Council’s opportunity to ask the community ‘have we heard you and have we got it right?’” Ms Vaughan said it was important that the community understood the importance of the 10-year strategic plan as it fed down into action plans that had a direct influence on the Council’s operational and capital works programs each year for the life of the plan. She said the strategic planning process was not new and both former Council’s had gone through the process in the past.

“This isn’t new, but what is new about this is that it is the first for the Coast as a whole and the first for the region. “This is an opportunity for the silent majority to speak, because ordinarily, the active little groups understand how to interact with council. “That is why we are genuinely enjoying the pop up experience because people walk past and ask ‘what are you doing?’. “Whilst it becomes an over-arching document for Council, this is the community’s plan, hence it really is our Coast and our future,” Ms Vaughan said.