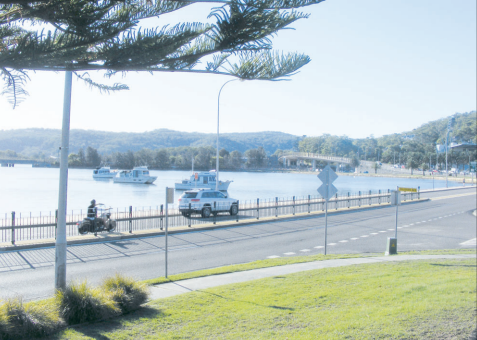 A billion-dollar project that aims to transform Gosford into the infrastructure investment gateway to Asia is waiting for a stamp of support from the Central Coast Council and NSW Government.
Mr Steve Duncan, Chairman of the G5 Global Vision Foundation and Bensville resident, said the proposal had been presented to the NSW Premier and Cabinet and that he was hopeful of an opportunity to meet with NSW Government representatives within the next couple of weeks.
The proposal, which includes plans to redevelop the Gosford waterfront, has been on the desks of senior executives at Gosford and then Central Coast Council for almost 12 months.
Mr Duncan said the proposal involved waterfront retail and public space, hotel and conference facilities; mixed use residential, commercial and retail, a high-speed intercity ferry service and infrastructure; and much more.
The Central Coast Council has asked the NSW Government to assist it to formulate a strategy and roadmap for the State Significant, world-class project.
In briefing notes presented to NSW Government Ministers at a recent Community Cabinet meeting, the Central Coast Council asked for “an audience in confidence with the State Government to present this opportunity and formulate a strategy and roadmap for the realisation of the project with a view to it being a State Significant project.
“Central Coast Council has been working commercial in confidence with a proponent on a proposal that has the potential to be a game changer for the Gosford Waterfront,” which the briefing notes described as the “gateway location to the Central Coast.
“The proposed Gosford waterfront development will work within the framework and principles set out by the intended Gosford Masterplan undertaken by the former Gosford Council, the Gosford Challenge, and Our City, Our Destiny Gosford Masterplan,’ the briefing document said.
“This State Significant project will require partnership with the NSW State Government across a number of portfolios including planning, lands and RMS.
“It has the potential to change the face of the Central Coast region, bring significant employment and economic stimulus to the region and contribute to the social wellbeing of the community,” the Cabinet briefing said.
Mr Duncan, who has had a long career as a merchant banker, said the project had been years in the planning and also involved a much bigger picture for Gosford and the region.
The G5 Global Vision Foundation owns a company called Cellate, which is an Australian building technology that dates back to 1964, and established landmark projects in Australia until it relocated to the United Arab Emirates in 1990.
Mr Duncan said he had successfully convinced the company to relocate its headquarters to Gosford as a stepping stone to expanding into Asia, and that Cellate was also negotiating the acquisition of a number of sites to develop as housing on the Coast.
“The Central Coast Council has been very meticulous in dealing with our proposal because they want it to happen,” he said.
“I would say they have been a lot more cautious than they have been in the past because they have been disappointed before.
“We have got to get Australia back working again and the Central Coast has been neglected because the same people have been in the same positions for the past 20 years and nothing has happened,” he said.
“Our group specialises in infrastructure capital raising and we have serious projects on the go in India, South Africa and Asia.
“We have been in the Middle East and have done very well out of it, but we are pulling out because the current situation is too dangerous.
“We believe the growth region in the future will be Asia, locations like the Philippines and Indonesia, and Gosford is perfectly positioned to be our gateway into those markets,” he said.
“We have the DA process and the public involvement process ready to go.
“We have brought in the best architects and engineers Australia has to offer and this is about infrastructure; it is not a land grab.
“We have done the 20-year plan.
“As an international investment banker, I knew I had to secure the funding first and that is what I have done.
“We have asked Council to give us the green light to start working through all the issues with the community and the environment.
“We will take the commercial risk; we just want to be able to lease the [waterfront] land on commercial terms.”
Mr Duncan said he believed the proposal would create 3,000 long-term jobs in Gosford.
“We are working with the University of Newcastle to bring a Centre of Engineering Excellence to Gosford.
“The Australian Maritime College will have a presence on the Central Coast,” he said.
The Gosford waterfront was described in the Council document as one of the most picturesque landscapes on the eastern shores of Australia.

“Referred to as the ‘jewel in the Central Coast’s Crown’, the current narrow shoreline is cut off from Gosford CBD by the Central Coast Highway.
“It is proposed to replace the highway with a world-class, high-quality, environmentally-sustainable waterfront development that rivals all waterfront developments around the world.
“The development will provide an attractive gateway to the City of Gosford and the Central Coast and will be the catalyst for the revival of Gosford CBD as a major regional hub for business, leisure and tourism.
“The Gosford waterfront project will also serve as the regional transport hub for the proposed Gosford to Sydney Intercity High Speed Ferry Service that will carry commuters and tourists between Circular Quay Sydney and Gosford CBD.
“The boats and all required operations and maintenance facilities will bring significant employment and economic benefit to the region.
“It will provide not only world-class marine, retail, residential and tourist facilities, but also a major transport node that will link Gosford to Sydney via a new transport corridor over the water,” the Cabinet briefing notes said.
According to the briefing notes, the development proposal would include: waterfront retail and public space “including access for the public in and around the waterfront”.
Australia’s first Opal Museum and trading exchange would also be part of the tabled State Significant development.
Other components would be a four-to-five star hotel with ballroom, conference facilities, entertainment and restaurant facilities; mixed-use residential, commercial and retail; parking facilities and a transport interchange to link to the local bus and taxi network.
The high speed intercity ferry service wharf would include berths for approximately six boats and there would be marine and slipway facilities, including fuel storage and a refuelling station, new dry stack facilities, boat ramp, pier and parking for local residents.
The proposal includes parking on Dane Dve and the return of space back to waterfront parkland.
The waterfront proposal includes plans for a purpose-built Central Coast Rowing Club, and relocation and construction of a new, state-of-the-art, Gosford Aquatic and Leisure Centre.
Other elements of the proposal included marinas and marina facilities, landscaping, boardwalks, furniture and external treatments, renovation of existing waterfront parkland on eastern shores, upgrade of walkway and children’s play area; and the “diversion of the existing storm water line under Dane Drive that flows into current cove where proposed development is situated.”
Point Clare is part of the proposal, which would include “upgrade and widening of existing road access from Point Clare Railway Station to new boating district” and a “continuous walk and cycleway from Gosford CBD through to Point Clare”.
Ettalong also gets a guernsey with the proposed construction of an Ettalong Wharf and Pier, including a transport interchange and parking facilities, as Ettalong would also have a direct ferry service to Circular Quay as part of the proposal.
Other elements of the proposal include a privately-owned dredge to keep the Brisbane Water channel navigable at all times for the ferry fleet.
The ferry service would include a fleet of vessels similar to those that currently run between Japan and South Korea.

Senator calls on Prime Minister to intervene over waterfront