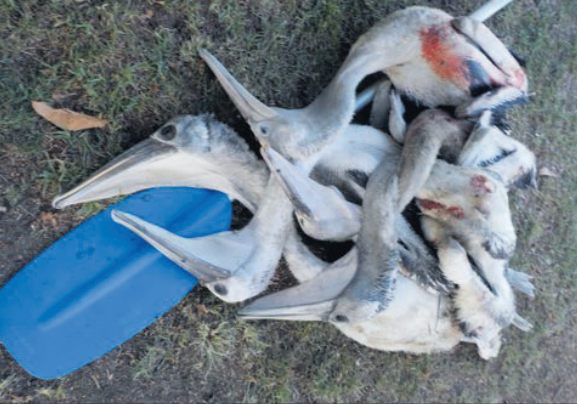 At least five infant pelicans were mauled to death by dogs at Blackwall on December 30.

Council rangers and the water police were contacted for assistance when the attack was underway on December 30 but they did not attend. Ms Wendy Gillespie from Pelican Rescue and Research said she believed the two unrestrained dogs were American staffordshire terriers. Due to an unusually low tide, the dogs had open access to Pelican Island, a known local nesting area, for at least two hours before she and several Blackwall residents intervened.

“The sad thing is it may be the same dogs that were out there in November when the Water Police and Council Rangers did attend,” Ms Gillespie said. She said she was concerned that the public did not understand the extent of the injuries that dogs could cause. “We need empathy and action. “People need to know that dogs can infl ict injuries that could take a small child out,” she said.

According to Ms Gillespie, she retrieved the carcasses of five pelicans that were between eight and 10 weeks old and would not have yet been able to fl y to safety. “The injured and dead pelicans were strewn around the island on arrival and the gross injuries indicated they were mauled by both dogs while swimming and either bled out or died later. “It would have been an extremely horrific and cruel death.

“According to locals who helped, the dogs had been out there causing carnage for hours before being ‘rescued from drowning’ by other residents in their kayak and handed back to the nonchalant owner without consequence. “I received a call between 1pm and 2pm and asked the first caller if they could rally neighbours with kayaks to get the dogs off the island. “I received a second call from the neighbours opposite who paddled out on my arrival. “When I arrived, the dogs were still free-ranging with one bounding through the nesting area with newly-hatched chicks. “As the parents could not return, most were likely to have died of exposure due to the heat wave.

“Other older chicks appeared to have died but there were no dead adults. “One adult had been mauled around the neck but survived and returned to new nestlings. “I contacted Council’s after hours number just after I received the first call and received a call back from a ranger at 5:30pm (four hours later) by which time most of the tragic drama was over. “I also contacted Maritime Services without a response to date, as they have been supportive in the past. “A neighbour also contacted the Water Police who said they would attend but they were at another location and they didn’t attend as I was out collecting bodies and checking for other injuries until 7pm.

“No regulatory agency attended this event,” she said. “I contacted the RSPCA in Brisbane the following day and spoke to an inspector who stated that without the name, address or rego number of the owner they couldn’t respond. “The rego number only surfaced on the weekend. I followed up with the ranger the next morning also and there was a change of shift so I was not contacted until Tuesday morning. “I contacted Gosford Police on Monday who advised that the proper channels were through Council’s ranger services. “The dogs could have killed other wildlife, domestic pets or children in the interim. “This has been a severe failure of the system.

“Sadly at the peak time of year when injuries and cruelty incidences are highest to our wildlife, there is almost no one there to contact for support or regulatory action. “Thankfully residents opposite the island had my contact and also responded and courageously paddled around the lethal dogs as they were rescued.

“Her husband then thankfully bravely agreed to be interviewed by NBN News and took the pictures of the dogs and owner. “This incident has to be answered with euthanasia of the lethal dogs and a major prosecution of the owner otherwise we know the system to protect innocent creatures and people is totally inept. “I have to say it’s the most devastating scenario that I’ve had to face and deal with in over 18 years of proactive rescue. “However, I would like to add that Council’s Rangers have been very supportive and helpful in relation to other dog issues but this event exposes the holes in the protective system during peak visitation time,” Ms Gillespie said.

In a media statement, Central Coast Council said: “If a dog attack has occurred residents should contact Council and our rangers will investigate. “The Companion Animals Act was introduced by the NSW Government in 1998 to protect pets, their owners and the broader community. “Under the Act, owners of puppies and kittens must microchip and register their pet by 12 weeks of age or when they are fi rst sold. “This ensures the pet can be returned to the owner if lost, hurt or stolen and links pets directly to their owners.

“Dogs are required to be restrained while in a public place at all times with the exception of prescribed dog off leash areas which are signposted. “Shared pathways such as the one at Woy Woy are not dog off leash areas so dogs need to be on a lead at all times. “Section 16 of the Companion Animals Act defi nes a dog attack as: ‘If a dog rushes at, attacks, bites, harasses or chases any person or animal (other than vermin), whether or not any injury is caused to the person or animal’. The only times when it doesn’t apply are in the case of vermin, if the dog is in its own property or if the dog is provoked,” the statement said.

Unique Aboriginal Corroboree and Cultural Festival to be held

Teachers strike over pay and conditions