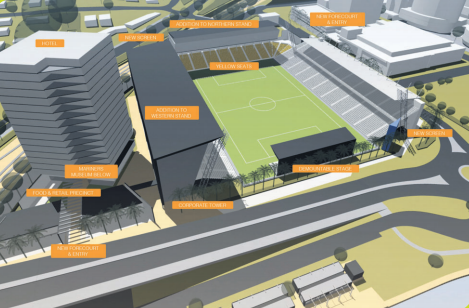 As Coach Paul Okon works hard to lift the Central Coast Mariners towards their former League-winning status on the field, the local national A-League franchise has called on the Central Coast Council to lift its game and turn Central Coast Stadium into a best-practice venue.

The Central Coast Mariners are arguably the region’s only premier sporting side and have stuck with the Coast when other sporting codes have turned their backs on the region. The local club was a foundation franchise in the national A-League football competition and one of only two regional clubs remaining in the competition. It has been playing its home games at the stadium since 2004, but the only things to have changed at the venue during those 13 years have been the height of the palm trees, the stadium’s name, and the quality of the playing surface.

Coast Community News has been attempting for months to break the story about the Mariners’ arm wrestle with Council to bring the stadium into the modern era, but both the Mariners and Council have denied any negotiations or the existence of any Mariners’ Master Plan for the venue. The Mariners have listened to the thousands of Coast families, youths and seniors, many paid-up club members, who sit in blistering heat in the northern and eastern grandstands (the cheaper seats) because TV broadcast deals mean most Central Coast games kick off at 5:00pm during the summer months.

Those same fans stand in queues instead of watching the match they have paid to see, sometimes way past half-time, to pay $5 for a bottle of water (worth $2 in the supermarket and provided the vendors don’t run out) and even more for hot food or a cold beer. The Central Coast Mariners have unveiled their vision for Gosford’s Central Coast Stadium and formally presented it to Council, which is the Stadium’s current owner and operator. The vision is the football club’s bid to transform the venue into a world-class entertainment hub.

Mariners’ owner, Mr Mike Charlesworth, said he had concerns that the current business model for the stadium did not facilitate best practice, which contributed to the venue’s lack of growth and improvement. Central Coast Stadium was officially opened in February 2000 and has remained relatively untouched during its 17 years of existence, which has resulted in the venue becoming dated and in need of immediate attention, according to Mr Charlesworth. The Mariners’ have put forward a five-stage concept which was devised to ensure Central Coast Stadium met stadium best practice and became an all-weather friendly, football friendly and digitally connected stadium that could also facilitate Westfield W-League double headers and more. At the moment, the stadium does not even have enough change rooms to cater for more than two teams on any one occasion. Following the upgrades, Central Coast Stadium would be in contention to host concerts, bigger events and trade seven days a week through a café and retail precinct.

The main components of the Mariners’ proposed stage-one upgrade for Central Coast Stadium included: dual big screens in the south-east and north-west corners of the venue; weather/sun protection over the northern grandstand; yellow seats; additional change rooms; wi-fi compatibility; a state of-the-art sound system; upgrade of the corporate facilities (including a 100- seat function room); and, a retail and café precinct. The Central Coast Mariners five-stage concept also included a hotel “with unmatched views of Brisbane Water”. But the local soccer club has gone much further than calling on Council to lift its game in terms of the venue’s management and future. The Mariners’, whose fans have already been instrumental in bringing one Central Coast Mayor to power, have made their stadium concept part of a broader campaign that they have called #GrowthForGosford. Charlesworth said he encouraged all community leaders, politicians, developers and anyone that had an interest in the growth of Gosford to stand up and present their vision for a better Gosford. “The Central Coast Mariners’ next home game against Perth Glory on January 28 will be dedicated to the vision to grow Gosford, and the club has formally invited anyone who has a view for Gosford to be present at Central Coast Stadium on game day.

“The aim is not only to present the Central Coast Mariners’ vision for Central Coast Stadium, but to unite all stakeholders who believe in #GrowthForGosford.” Central Coast Mariners’ Chief Executive Officer, Mr Shaun Mielekamp, said he invited all community leaders to attend the match on January 28. He said that as the club continued to grow, the Stadium had to improve. “As the Central Coast Mariners continue to grow, Central Coast Stadium must grow with us,” Mr Mielekamp said. “A necessity for our region is the improvement of Central Coast Stadium that is the only fl ag bearer for major infrastructure development in Gosford’s CBD over the past 17 years,” he said. “Whilst there are certainly some hurdles ahead, we are confident that there are also solutions. “We cannot do this alone and need the stadium and infrastructure to grow if we have any chance of fulfilling our potential. “New revenue opportunities presented by the stadium will empower us to invest long term towards our football resources.

“Our football will reap the rewards of the club’s growth and it is important to understand that this is a long-term play for us to compete with the big-four clubs who are growing bigger and faster every day. “Whilst it is the small dayto-day things that hinder events at the stadium, such as a poor sound system, long bar and canteen lines, accessibility and weather protection, these frustrations, if unaddressed, are merely the tip of the iceberg. “The worst thing that can happen is nothing. “Our main priority is to drive change and growth. “If the Mariners aren’t going to do it, then who is? “The stadium is now and will always be our home. “Like any home, the stadium can get tired and need some love and energy injected to keep it thriving,” Mielekamp said.

of Central Coast Stadium with a view to maximising the contribution the Stadium makes to the future of the Central Coast,” the council statement said. Mr Mielekamp said he had spent the past 18 months unsuccessfully working with the former Gosford Council and the new Central Coast Council to address the stadium’s care and its future. “The Council has just been saying they will not formally reply on it, they will take care of it but the

speakers haven’t been working properly the whole time I have been CEO of the Mariners,” Mr Mielekamp said. He said following the Central Coast Mariners’ last home game on Sunday, January 8, the football club received complaints about long lines for service at food and drink vendors behind the eastern grandstand closest to the “concessional” membership seating and open ticketing areas.

The Mariners have not been given a merchandise stand on the eastern side of the stadium because Council said it required all available vending outlets, although several have remained closed at recent home games. It also appears that the overall number of food vendors and bars operating in the eastern stand has been steadily reducing and EFTPOS is no longer available at all vendor cash registers. “We have to pay for our small merchandise tent (in the north-eastern corner of the concourse) and we had to swap it for a bigger one,” Mr Mielekamp said.

“The Council is running the venue and then it tenders out the rights to catering companies who are not invested in the event,” he said. The club’s efforts to provide cheaper refreshments for its fans in the form of a sausage sizzle have been rejected by Council, he said. Mr Mielekamp said he had been asking Council for its plan for the stadium for the past 18 months. “There appears to be no plan,” he said. “We know this isn’t best practice management for a stadium, it is being managed like a community park rather than a business opportunity, when it could be the showpiece of the Gosford CBD,” he said. Mr Mielekamp said he wished to emphasise that the current stadium management personnel were “not to blame” and praised their performance given their limited resources.

The CEO came to the Central Coast Mariners with venue management experience due to his time with the Western Sydney Wanderers and the Penrith Panthers. During his time at the Western Sydney Wanderers, he saw the Wanderers, the Parramatta Eels, the NSW Government, Western Sydney University and Local Council “come together and link arms to redevelop Parramatta Stadium and create a new multi-million dollar state-of-the-art venue”. The Central Coast Mariners’ Football Club has urged anyone with views or ideas to help Gosford grow to contact their office by phone or email for an opportunity to present at the next home game “and unite to make a difference”. Central Coast Taskforce Chair, Mr Chris Holstein, was quick to support the Central Coast Mariners’ calls for the Stadium to be upgraded. “Central Coast Stadium is in need of an upgrade to keep pace with the needs of the community and to enhance economic growth for the region,” Mr Holstein said.

“For 17 years the Central Coast Stadium has served the community with first class sporting events, but it now needs an urgent upgrade to allow that to continue, but also to grow,” he said. Mr Holstein said any revamp should include a new function area to complement the stadium and attract a diversity of events. Amenities upgrades were also needed to allow greater usage of the fi eld, such as additional change rooms to allow female and male home matches on the same date. Having been instrumental in the funding and construction of the stadium, Mr Holstein said the community asset shouldn’t be taken for granted. “Just like any asset, failure to maintain and renew it is a recipe for disaster,” he said.

Mr Holstein said he called on the Central Coast Council and State Government to take immediate steps to address the stadium’s needs for greater community and economic benefit. Local State politicians and other former Councillors have not yet commented on the Mariners’ proposal.