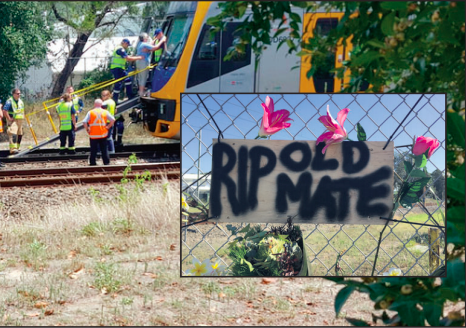 An elderly man on a mobility scooter has died after being hit by a train at the Rawson Rd level crossing in Woy Woy. Police said inquiries were continuing and a report was to be prepared for the Coroner.

Sydney Trains reported at 11:17am that trains had been suspended between Hawkesbury River and Gosford stations due to the fatality. Police at the scene said the man went on to the crossing after the boom gates went down and the lights started flashing. It was around 11am when he was hit by the northbound interurban passenger train. Passengers, adults and children, had to be evacuated by emergency service personnel and passengers were transferred to buses. Police said the man somehow became stuck or found himself in the middle of the rail crossing as the train approached and sustained fatal injuries.

Crime scene unit detectives and representatives from Sydney Trains were on the scene soon after the incident occurred and remained there for some time following the fatality. Forensic experts were on site investigating why the man was in the path of the train and had not used the nearby pedestrian underpass. The pedestrian underpass had been opened to the public in 2015 as stage one of the Rawson Rd Level Crossing Replacement Project, a project of the former Gosford Council with funding from Transport NSW. The Public Transport Command of the NSW Police Service stated that due to formal identification issues and issues around the circumstances of such a serious accident, the name of the victim could not be formally released. The Public Transport Command was in charge of the ongoing investigation into the incident.