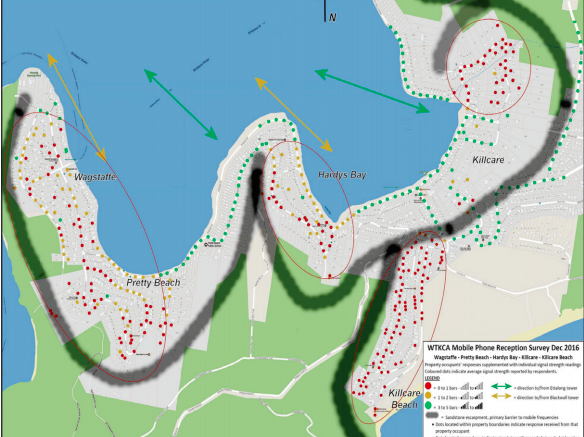 A preliminary report has been released on the results of a mobile phone black spot survey conducted on the Bouddi Peninsula.

“The areas of poor reception were loosely defined by our 2014 Mobile, TV and Radio reception survey, so forms for this survey were delivered only to those areas and immediate surrounds “Responses have been tabulated and transferred to a map of the area. “This illustrates quite graphically both where our black spots are and, after adding arrows to show the direction to the sources of our mobile signals (antennas on the Mantra, Ettalong, and on Blackwall Mountain), how they are created.

“Mobile signals are blocked by our beloved sandstone which effectively creates three separate bowls at Wagstaffe; Pretty Beach and Hardys Bay; and Killcare and Killcare Beach. “These bowls are separated from each other in such a way that it is not possible for a single tower to solve the reception problems of each at once simply because there is no single location where a tower could be placed which could beam into each of these black spots.

“Mobile signals travel very much in straight lines and don’t like obstructions of any kind. “Sandstone absolutely obstructs. “Tree leaves do not obstruct totally but do attenuate, the more leaves and more moisture in them, the more attenuation. “Building structures also obstruct.” The association has delivered its map to Ms Wicks. “We have asked that, rather than attempting to solve this issue with a single tower which is clearly not possible, the communications people seriously consider a solution proposed by Mr Dave Abrahams at a forum in December. “This was to use mini or micro towers to address each black spot separately. “As opposed to a highly intrusive regular 30-metre-high tower, micro towers are unobtrusive and able to effectively service individual black spots of the size we have here. “A large scale print of the map is on display in our noticeboard adjacent to Wagstaffe Hall,” he said.

Peninsula has hottest suburbs on the Coast