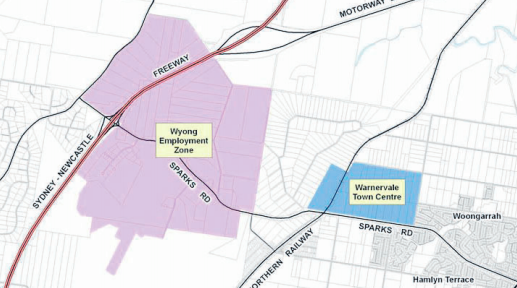 The location of the Wyong Employment Zone

The new Central Coast Council must develop the Wyong Employment Zone (WEZ) at Warnervale if it is serious about increasing employment on the Coast, according to the State Member for The Entrance, Mr David Mehan.

Mr Mehan made his statements about the WEZ in response to questions about the poor recent performance of the tourism industry on the Central Coast. “The tourism industry is over-rated as a local employer,” Mr Mehan said. “The biggest employer on the Central Coast is retail, followed by health, and then community services,” he said. “We should make sure all employment opportunities are fully promoted and I think Council is doing the right thing with its current review of how it spends to promote the region, but we haven’t had a big employer move to the Coast since Woolworths opened its distribution centre at Warnervale in 2009-10.

“The major problem is that Council has not gone ahead with the Wyong Employment Zone in the manner in which it should have. “The former Wyong Council held it back in favour of its own pet projects, such as the idea we were going to get a new university there, and it seems that everything the former Wyong Council wanted to do in that northern area is still being supported by the Central Coast Council,” Mr Mehan said. Mr Mehan said he believed, in terms of the WEZ and the generation of local employment opportunities, the new Central Coast Regional Plan “throws it all back on Council” to get anything done. “But Council has done nothing to generate employment.

“If you ask Ian Reynolds [Central Coast Council administrator] or Rob Noble [CEO], they would say their main job is to bring the two councils together and not review every decision made by the former councils. “They are hoping the airport takes off, but I can’t see that happening with the competition from Newcastle,” he said. Mr Mehan said he was also concerned that the decisions of the former Wyong Council and one of Mr Reynold’s first actions as administrator may very well force the NSW Government to take its proposed rail maintenance facility to another region.

“They have spent so long making the decision about the location, and it should have been made by now,” he said. “It has all been down to Council putting the NSW Government in an unsuitable spot and denying them industrial land,” Mr Mehan said. The NSW Government had earmarked land within the WEZ as a suitable site for the Intercity Fleet Rail Maintenance Facility until the former Wyong Council promoted another site in Kangy Angy that is flood-prone and environmentally sensitive. Mr Reynolds subsequently went ahead with the sale of the Kangy Angy land to Transport for NSW last May.

The decision to locate the proposed rail maintenance facility at Kangy Angy is now the subject of an audit by the NSW Auditor General, has been referred by the Auditor General to ICAC and is being reviewed under Commonwealth environmental protection laws. Mr Mehan said he feared the actions of the former Wyong Council in relation to the Transport for NSW project would result in the region losing the facility and its positive economic fl ow-ons to another region.

“The private sector has done nothing to create jobs, and tourism isn’t going to soak up the quantity of well-paying jobs needed,” he said. Mr Mehan said he believed Central Coast Council needed to be ready with an alternative site to Kangy Angy if Transport for NSW intimated that it would move the rail maintenance facility away from the Coast. “Council can always change its mind,” he said.