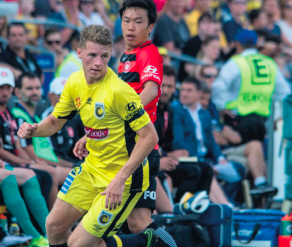 Central Coast Mariners and Melbourne City have put on a show for football fans in Gosford on New Year’s Eve, with both sides coming from behind in a heart-stopping 2-2 draw.

In a match that proved to be somewhat of an arm-wrestle in the opening exchanges Tim Cahill headed City in front before the interval with a regulation header.

After holding majority of the field position in the opening stages the home side capitalised in the second half with two goals in eight minutes from Trent Buhagiar and Roy O’Donovan that saw Central Coast Stadium explode thanks to the 11 thousand strong crowd.

With the Mariners holding the lead it looked certain to end in New Year’s Eve delight for the Yellow & Navy but there was still late drama to follow on the waterfront.

It seemed certain to fall the way of the Mariners’ when leading scorer, Roy O’Donovan had a strong chance to bank a quick-fire double but was unable to connect from just a couple of yards out leaving the home fans on the edge of their seats.

Instead Paul Okon’s side were left to rue that miss after City earned a late penalty that was buried emphatically by Bruno Fornaroli to earn a share of the points.

Despite the Tim Cahill header, our Umina junior, Trent Buhagiar emerged as the star of the show who left Central Coast Stadium with a goal and assist to his name in front of many family members and friends.

Second to Trent Buhagiar though was another star on the night. After Cahill’s opener he prepared for the trademark corner flag celebration. Before Cahill could unleash his left-right-left the ball boy swooped in to save the corner flag.