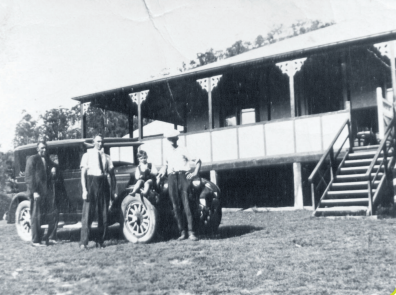 Fairview was an example of early colonial architecture

A 30 year campaign to save Fairview Homestead at Mangrove Creek has won its battle to restore the colonial property.

According to Ms Margaret Pontifex from Mangrove Mountain, Central Coast Council has approved an application for restoration work to be completed on two existing buildings at Fairview, including the original residence. Approval has not been granted to develop the property into an historical site that would include a museum and public tours.

“The Friends of Fairview and the Fairview Homestead Association can now focus their work on a heritage listing for the property and we can now offi cially start raising funds and applying for government grants,” Ms Pontifex said. She said the campaign to restore Fairview, located off Ten Mile Hollow Rd, had been running for 30 years. According to minutes from the now dissolved Heritage Committee of the former Gosford Council, both the planning proposal to heritage list the property and a development application for its restoration were placed on public exhibition late in 2015.

In February, Gosford Council, as owners of Fairview, gave Friends of Fairview permission to lodge the development application for its restoration. However, the DA did not progress because the Association had not paid the relevant fees, so in June 2015, Council agreed to waive $7,390 in fees so the application could be progressed. Mr Warren Andrews, President of the Fairview Homestead Association, said the homestead currently had an interim heritage listing and Central Coast Council was completing its mapping. “The mapping will be finished by Christmas and it will then go to the Minister to be signed off in the New Year,” Mr Andrews said. He said garnering government funding for the restoration would be a long-term project. Meanwhile, the Association is looking for business sponsors and public donations.

“We have applied for a grant to build an interactive website which should improve our fund raising in the New Year,” he said. “We are very happy with what we’ve got, but we will keep speaking with Council about other aspects of our business plan,” he said.