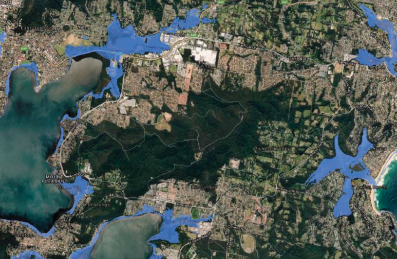 Land owners in low lying areas of Gosford, and suburbs such as Davistown, will not be compensated for future coastal hazards under the NSW Government’s new Coastal Management laws.

According to Mr Pat Aiken, Secretary of Coastal Residents Central Coast, the new laws don’t include adaptation plans for existing communities or compensation for landholders affected by sea level rise or future coastal hazards. For example, parts of Davistown have been indicated as wetlands in the Draft Coastal Management State Environmental Planning Policy (SEPP) mapping which is currently on exhibition and open for public submissions.

“The issue is that the new Coastal Management framework of legislation, the Coastal Management Act, Manual and SEPP, do not support the development of adaptation plans for existing developed communities and do not support the compensation of landholders impacted by current or future coastal hazards such as rising seas,” said Mr Pat Aiken. “Despite a minor reference in the Act regarding compensation, the Draft SEPP ignores this important concept,” Mr Aiken said. “The NSW State Government doesn’t accept any responsibility for compensation,” he said. “The Davistown Wetland areas currently for sale should be purchased and made a public asset as occurred at Bambara.

“But unless this draconian legislation is either scrapped or heavily modified to support the concept that private land that must be allowed to succumb to rising seas must be purchased by the State, there will be no solution or agreement. “Privately owned residential lots in Gosford, some with family homes, are now identified in the proposed SEPP mapping as wetlands, when previously they were not. “The SEPP introduces for the first time, the specific concept of time limited development consent for private residential land without any compensation for those landholders. “This is not adaptation “It is the unfair expropriation of private land to become a public asset.

“When it comes to building huge freeways and tunnels in Sydney, there is plenty of our hard-earned cash available for just terms compensation for landholders whose land is needed for these massive infrastructure projects. “But when it comes to climate change and rising seas, families and other private landholders or local communities in regional areas are expected to suck it up and bear the full cost. “The Coastal Management legislation of NSW unfairly reduces this burden on Sydney while regional areas such as the Central Coast are expected to carry the full load. “It is these regional areas that the people of Sydney escape to for recreation and holidays and yet only regional communities are forced to pay.

“This is typical of the NSW Government which is out of touch with regional NSW. “If Climate Change Legislation such as the Coastal Management Act creates a major disparity in implementation between the Sydney Region and all other NSW Regions, it will fail. “Evidence of that failure can be seen already in the great disparity between Collaroy Beach and Wamberal Beach, and now with the Davistown Wetlands for which the State Government takes all authority but no responsibility.

“Over $1.7 billion dollars is now earned by the NSW State Government every year from coal mining royalties. “Why does all this money go South?” Mr Aiken asked. In his role as regional coordinator of the NSW Coastal Alliance, of which Coastal Residents Central Coast is a member, Mr Aiken wrote to the NSW Premier, Mr Mike Baird, on December 9, requesting an extension of the public consultation period for the draft Coastal Management SEPP. He pointed out to Mr Baird that the State Government had failed to release Coastal Vulnerability Mapping at the same time as the draft SEPP.

“This critical mapping has not been provided, and according to NSW Government Representatives at the Erina Information Session on December 9, does not exist,” Mr Aiken said in his letter to Mr Baird. Full consultation, including the provision of all mapping of the four new coastal management areas, was promised to Parliament for the “many thousands of people of NSW who are now affected by the proposed SEPP,” he said.

“How can any reasonable person of authority make an informed comment or submission when the information for discussion and consultation does not appear to meet legal requirements and does not appear to accurately describe and/or omits the hazard claimed to affect land?” On Tuesday, December 13, Mr Aiken said the NSW Department of Planning and Environment had agreed to extend the consultation period on the draft SEPP until January 20, but had made no other concessions.