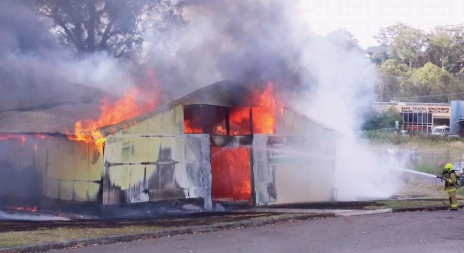 The building destroyed by a fire at the Gosford Showground in December was the Horticultural Pavilion.

Gosford Showground Trust Chairperson, Ms Roma Stonestreet, confirmed the Pavilion was the building at the centre of the incident. The Pavilion was used for a variety of activities on the grounds including Feral Archery classes, livestock and produce displays and competitions and as a venue utilised for the Annual Central Coast Regional Show. The Pavilion also adjoined a work shed and several outlying storage containers. While investigations into the fi re and its cause are still underway, Ms Stonestreet said at this point in time the fi re was believed to be caused by an electrical fault.

The destruction of the Horticultural Pavilion also spelt another blow to the Gosford Greyhound Club and the Greyhound Breeders Owners and Trainers Association NSW (GBOTA), the lessees of the former exhibition building. The Gosford Club had to abandon trials scheduled for December 13 due to the blaze, knocking out power and water to the site, with the GBOTA resolving to carry no further events forward while they work with contractors and authorities to identify the cause of the blaze. Gosford Greyhound Club’s, Ms Rachel Harrington, said the fire would not impact too heavily on the Club’s racing schedule but the assets lost during the blaze would be missed.

“It’s devastating for community groups too, I know the gentleman that runs the Feral Archery classes has essentially lost his business because of this,” she added. Fire crews, NSW Police and other stakeholders, including Ms Harrington, spent most of December 15 investigating the cause of the fire and assessing the damages. Ms Harrington said the GBOTA had confirmed that a new Pavilion will be built on the Showground sometime in the new year.