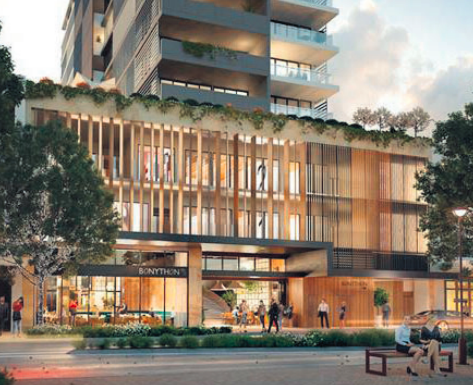 An artist's impression of Bonython Tower, to be built in Mann St

Advertising, media and property entrepreneur, Mr John Singleton, has decided to kick-start the rebirth of the Gosford CBD with the development of the Bonython Tower at 155 to 163 Mann St, Gosford.

Bonython Property and Investments, the development arm of the John Singleton Group, is currently waiting for the Central Coast Council to approve a Section 96 application to amend the DA that was approved 12 months ago. Another developer owned the majority of the site (except for a small property at 163 Mann St), located in the same CBD block as the Imperial Centre, but it was acquired by Mr Singleton with the development consent.

The original consent was for the demolition of existing buildings and the construction of a ground- floor tavern with 75 units of shop-top housing. The current Section 96 reduces the number of units and increases the number of parking spaces to 62. The ground floor tavern is replaced with commercial space and the property at 163 Mann St (subsequently acquired by Singleton) is included. According to the company’s website, Bonython Tower will be a “premium mix of luxury residential and commercial suites… offering spacious one and two bedroom apartments with sensational views and the convenience of the vibrant Gosford City at your door.”

The building will also include three levels of commercial space, the third incorporating an outdoor terrace. The recently-appointed Executive Chairman of Bonython Property and Investments is Mr Paul Anderson, former Chief Executive Officer of Gosford Council. The redesign of the project has been completed by East Gosford-based architect, Mr Cain King, from CKD Architecture. “We have been working closely with Mr Scott Cox [Central Coast Council’s Group Leader Environment and Planning] and his team to finalise the matter [of the Section 96 application] as soon as possible,” Mr Anderson said. “The redesign was to create a beautiful building in the centre of the Gosford CBD,” he said.

“The design brief was to create a building that would stand the test of timelessness and illustrate the absolute beauty of the surrounds in which it is situated and the benefits of Gosford as a place to live, work and play. “Given its location, the building has to reflect modern but quality materials in its finishes and fittings and will be attractive to investors and home occupiers as it provides unsurpassed views of Brisbane Water. “It has close immediate access to the railway station and other transport nodes along with the benefits of CBD living with supermarkets and specialty stores at its doorstep,” he said. The new design incorporates a ground- floor restaurant café “within the building that will be as good as you experience in Melbourne or Sydney,” according to Mr Anderson.

“The ground floor café/ restaurant will be to cater for the extra people living in the site both during the day but also in the evenings. “We are expecting a top class restaurant operator who will cater for commercial operations as well as restaurant trading.” Marketing and Sales for the development has been taken on by Mr Stephen Gittoes of Gittoes Real Estate in East Gosford. Expressions of interest have been invited over Christmas with the official marketing to commence early in the New Year. In terms of who Bonython Property and Investments sees as the target market for the apartments, Mr Anderson said: “We welcome aboard anyone who has a passion to live in ultimate luxury in the heart of the Gosford CBD.

” The detail of the Construction Certificate and building contracts are currently being completed, so pricing for residences in the new building is not yet finalised. “We anticipate demolishing the current buildings midway through 2017 and construction will commence immediately following that. “We should see a crane on site by the end of the 2016-17 financial year.” The building will take 19 months to construct, so completion is anticipated by late 2018 or early 2019. Mr Singleton has had a connection to the Central Coast stretching back over 60 years when he spent family holidays at Killcare as a boy.

Mr Singleton is said to have “an absolute unsurpassed passion for the Coast and everything it has to offer from beach front living, coastal lifestyle, and hinterland and rural opportunities, and all of this within an easy hour and half from the Sydney CBD. Ultimately, after endeavouring to encourage the likes of Lend Lease, Meriton and many other large developers to take the place seriously, Mr Singleton has decided to “do it himself”. Mr Anderson said Bonython Tower would be the first of many Bonython Property and Investment developments to be undertaken on the Coast “to give back to the community good quality design and facilities that it so badly needs and deserves”.

More money to be spent on Gosford CBD