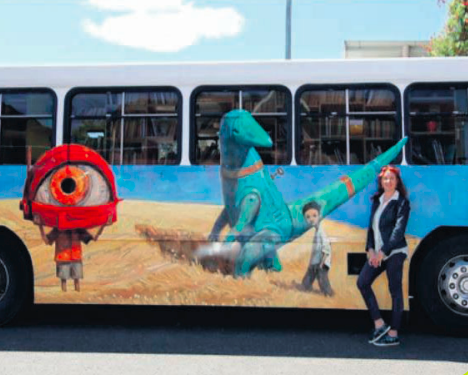 Sydney Writers’ Festival’s Children’s Festival of Moving Stories will be visiting Gosford for the first time on December 8 and 9.

Russ the Story Bus, adorned with Shaun Tan’s distinctive artwork from his acclaimed Rules of Summer, will travel with a special cargo of authors to meet children from Gosford East Public School and Woodport Public School. The 2016 Children’s Festival of Moving Stories features 30 of Australia’s most-loved children’s writers, as well as debut author, Richard Roxburgh (Artie and the Grime Wave). “The Children’s Festival of Moving Stories is part of a long-term strategy by Sydney Writers’ Festival to introduce young readers to authors and illustrators to inspire them in their own aspirations for the future,” said Ms Clare Sawyer, recently appointed Sydney Writers’ Festival’s Head of Children’s Programs.

The Children’s Festival of Moving Stories is a key part of Sydney Writers’ Festival’s ongoing commitment to presenting quality literary events for children. The program has been developed in consultation with teachers, parents, librarians, community groups and arts organisations. Shaun Tan, whose artwork adorns Russ, is known for his books The Rabbits, The Red Tree, Tales from Outer Suburbia, The Singing Bones and the wordless novel The Arrival, which have all been widely translated and enjoyed by readers of every age. Russ the Story Bus is a mobile creative space where children can browse a library full of the latest children’s books, choose a book to take home, swap a book, settle down and listen to a story or learn how to create a story.

Russ’s mission is to take stories out into regional NSW. Joining Russ for the ride to each school will be an Australian author or illustrator who will chat with children about their craft. This year’s talented lineup for the regional tour will be Judith Rossell and Tony Flowers.

Market run by children for children